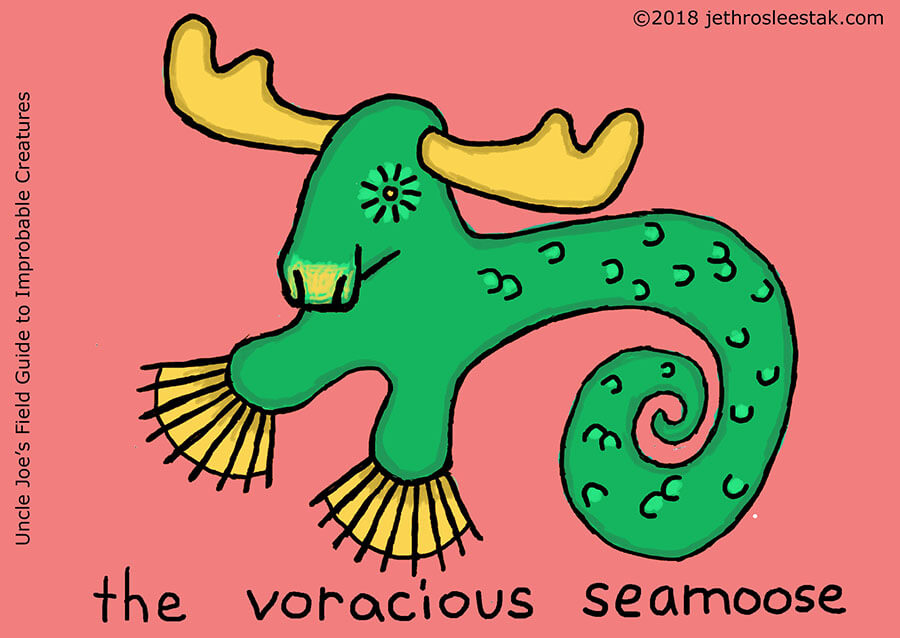 The Voracious Seamoose was genetically engineered to replace goldfish as the disposable animal given away at carnivals to teach children how ugly and depressing life is.

The problem is that the Seamoose was bred to be even more indestructible than the little orange carp they replaced, and so most of them weren’t actually dead when they got flushed down the toilet.

The Seamoose is extremely hardy. It can live in saltwater as easily as freshwater and in almost any temperature range, and so it rapidly became an invasive pest worldwide in spite of being banned soon after it appeared on the market.

By the time of the 2047 UN biodiversity survey, the Seamoose could be found in teaming schools everywhere from the headwaters of the Congo River in Africa to the Arctic Seas of the Bering Straight.

This had dire consequences for humans. The Voracious Seamoose is more aggressive than the piranha and feeds in a carnivorous frenzy.

Stepping into any body of water anywhere in the world suddenly became extremely dangerous. Unlucky swimmers were stripped to the bone in a matter of seconds.

The creature has no teeth in its sucker mouth, but both of its horns are sharper than steel razor blades on every edge. Or at least they evolved to be so in the wild. It now travels in schools of millions.

Even the creature’s designers were forced to admit in the class-action lawsuit that “the situation is less than ideal.”

Unlike the seahorse, the Seamoose actually contains DNA from its terrestrial namesake.

That’s because the Seamoose was made by three grad-school dropouts to be sold online to finance a real estate project, and the seahorse diverged from pipefish 13 million years ago.

Freshwater and saltwater worldwide. All zones.