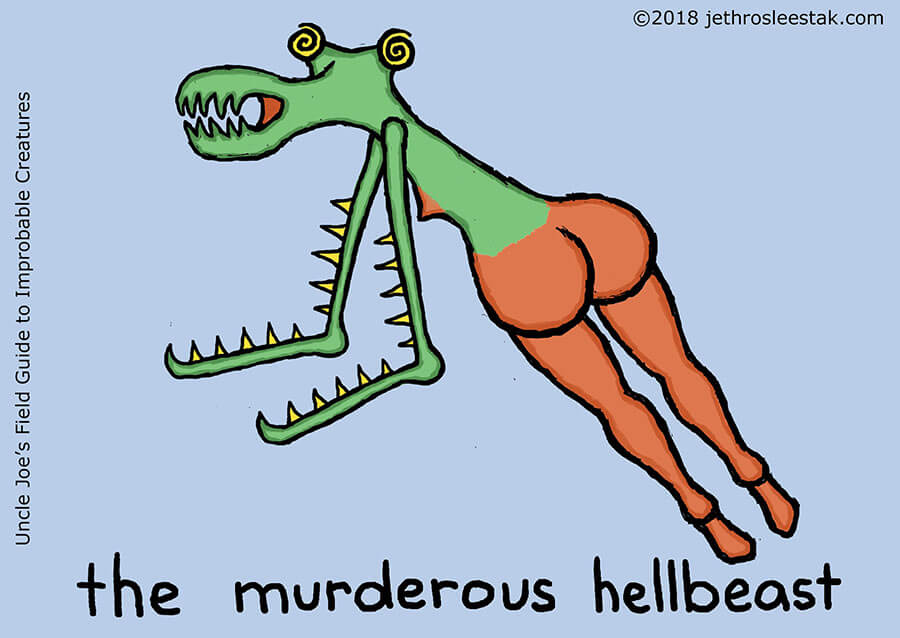 The Murderous Hellbeast of Alpha Centauri 6 was originally called the Hot-Ass Mommacita by the cis-hetero-male crew of the space freighter that discovered it on the 27th year of their nominally 20-year mission.

The space freighter was the #LOL-420-YOLO, part of an asteroid mining operation in the Alpha Centauri system, and its crew included the sub-crews of all its detachable mining units, and so 87 people in all.

Before the planet was nuked from space, Alpha Centauri 6 was sufficiently Earth-like to be used for R&R by the crews of the different asteroid mining vessels working out that way.

Mostly this R&R consisted of drunken hunting and fishing trips where the goal was to shoot as many creatures as possible using high-caliber rifles and rocket-propelled grenades. (You don’t get many sensitive types working in asteroid mining. Or women. Or guys who aren’t complete assholes.)

On the day of the creature’s discovery, the crew of the LOL was just winding down a relaxing afternoon of shooting whales with bazookas and was about to take a turn at penguins with flames throwers when a Lieutenant Gruntfelt spotted something swimming not too far from their hovercraft.

Excitement increased when they steered closer to the swimmer and saw that whatever it was, it had a really hot ass.

Space psychologists assure us that after 27 years of not seeing a human female in real life, the hetero-male crew of the LOL were physically incapable of seeing any part of the creature except its really hot ass.

Long story short, the Hellbeast killed half the crew during its capture and the other half one at a time when they each tried to fuck it in secret without anyone else knowing or fighting to do so, and then the mission commander eventually had to authorize nuking the planet from orbit -same story, different system, yada, yada, yada.

The crew’s contract for the Alpha Centauri mining mission was for 20 years nominally, and every last one of the crew assumed it would be 20 years, or 21 or 22 at most.

Well, funny you should ask. It seems that one crew of heavy-equipment operators actually managed to bring a few of these back alive, and they have colonized the ventilation ducts of half the mining fleet.

Central Command keeps sending in rotating extermination crews, and officially they always eliminate each and every Hellbeast, but it seems the regular crews have been hiding their favorites, removing tracking beacons,  building false compartments, falsifying blueprints and documents of every kind, feeding them murder victims, etc.

Asteroid Mining had always been sad, dangerous, and depressing.