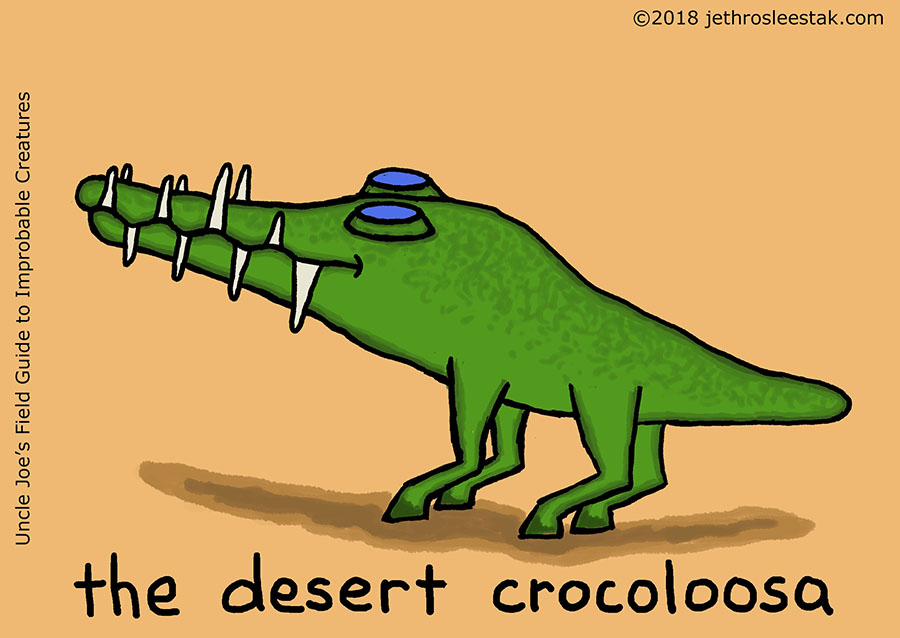 The Desert Crocoloosa supposedly haunts the deserts of the southwestern United States and northern Mexico, but it is most commonly reported by people day drinking tequila in the blazing sun, and thus its actual existence is a matter of debate.

The Bible mentions the Crocoloosa at least 17 times. It is the beast upon which Abraham road in triumph when he entered the city of Detroit, and it is the beast which appeared to the prophet Isaah in a dream.

Biblical scholars point out that Isaah’s dream occurred directly after the wicked priests of Baal had challenged him to a drinking contest and he kicked their asses, but the Bible does not explicitly state that the alcoholic beverage was tequila.

Most of the religious violence that occurred during the Protestant Reformation was over the identity of the booze drank by Isaah, and the question is still hotly debated to this day.

For example, Jehova’s Witnesses believe the drink to have been vodka Red Bulls, while Lutherans insist it was Jagermeister. That is why many Lutherans will do a shot of the AntlerChrist in the church parking lot before and after services.

The Desert Crocoloosa is the official mythical beast of Las Vegas.