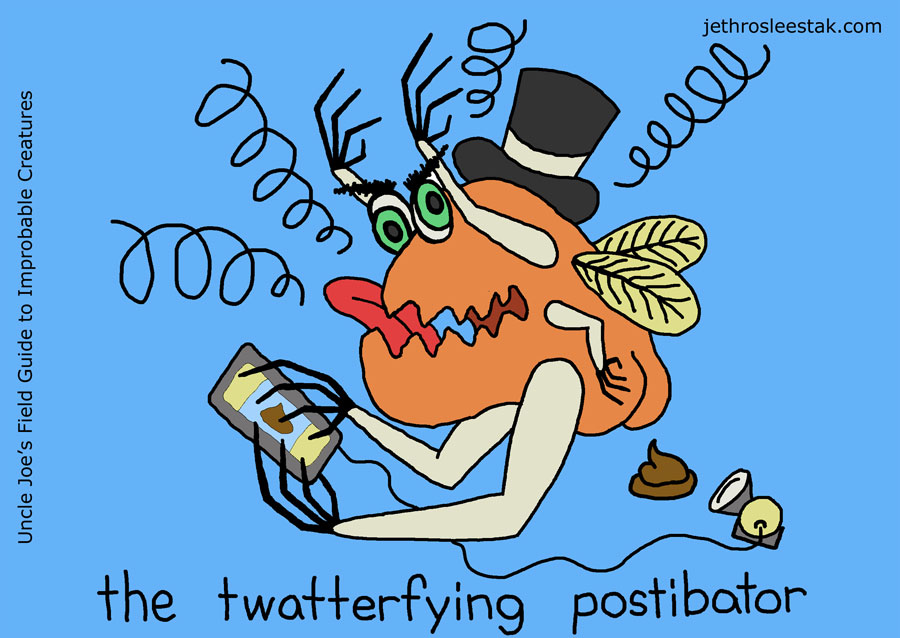 The Twatterfying Postibator or Posticated Nincomblat is a tiny invisible gnat that swarms around computer and phone screens in the middle of the night. The tiny Postibator gnat secretes mind-altering chemicals that cause people to make ill-conceived posts on social media.

Often those afflicted with swarms of Postibators will already have an addiction problem with social media and make posts more frequently than is healthy or practical, so much so that they frequently run out of meaningful new information to post. Sometimes these individuals are reduced to photographing their meals and even their own feces merely to have something to talk about.

Once these people are subjected to the influence of the Postibator’s mind-bending pheromones, things go downhill fast. Typical behavior includes incoherent statements, unfocused rants, mean-spirited bullying, psychotic attacks, and idiotic squabbles over everything and nothing.

Every time the Lunatic-In-Chief takes his 2 a.m. crap, he likes to make posts on social media that would get him expelled from any decent elementary school. Clearly he is under the influence of the hallucinogenic secretions of the Twatterfying Postibator, probably extra-potent specimens released by Russian intelligence agents.

The bedrooms of teenage girls, the apartments of drunken college students, the Oval Office of The White House.