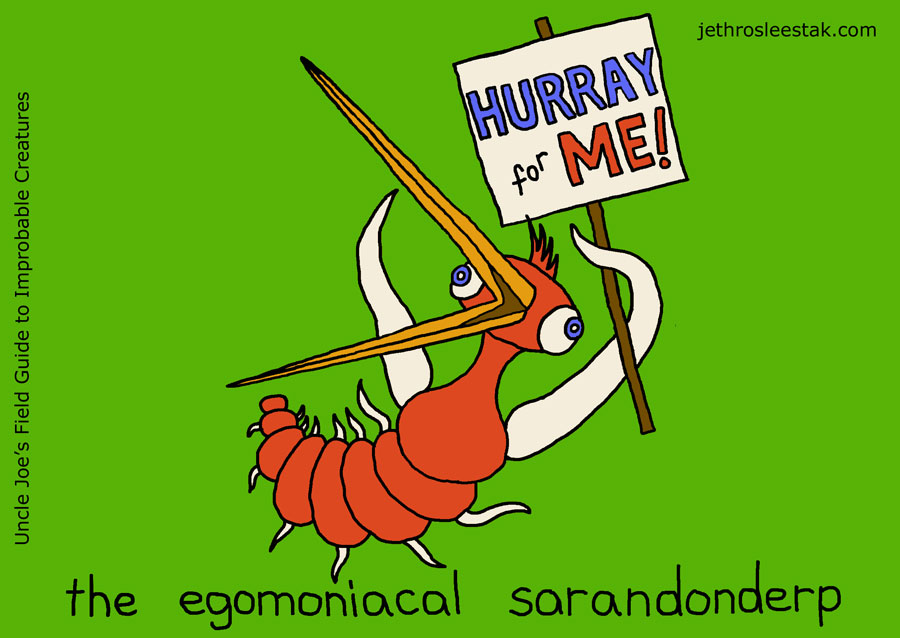 The Egomaniacal Sarandonderp is a microscopic brain parasite that causes people to make crackpot decisions in elections where they don’t like either candidate.

The Sarandonderp secretes a hormone called “egomone,” which causes infected individuals to overestimate the importance of their opinions and preferences, to the extent that more important concerns are neglected, even life and death concerns.

Clinical studies with synthetic egomone have shown that under its influence, people literally lose the ability to gauge likely outcomes and react accordingly. Scientists believe that it is the emotional high induced by egomone that makes those infected blind to everyday realities and convinces them that their preferences must and will be accommodated in some way.

Most of the Sarandonderp’s victims die of a terminal case of the dumbass, and so researchers have had limited opportunities to interview people who recover.

Mervin Blerman of Marietta, Georgia was one of the few fortunate enough to survive a bout with the Sarandonderp, and his interviews are some of the most quoted in the medical literature on the parasite.

When asked to explain what could have caused him to make such an important decision in such an irrational way, Mr. Blerman used an analogy to illustrate his state of mind during the infection:

I didn’t give a hoot that it was the Battle of Stalingrad, and I was caught in the middle of it. I didn’t give a hoot that hundreds of thousands of Germans were shooting at hundreds of thousands of Russians and vice versa. I’m for Catalonian independence, and I am going to stand there right in the middle of it and wave my all-important Catalonian flag.

It’s not like I might actually be killed by the thousands of rapidly firing soldiers charging from either direction or that I might really have to live with the consequences of what is going on around me. What’s important is that I can go to dinner parties afterward and tell everyone I waived my Catalonian flag.

The Sarandonderp infection makes you feel insulated and above such petty concerns as someone trying to put a bullet through your head. That’s the best that I can explain it.

There were actually a few individuals entering the gas chambers of the Dachau concentration camp who insisted that they still wouldn’t vote for that fellow who ran against Herr Hitler and were eager to list all the reasons why. Some shit about emails and all the other stuff they had seen on Fox News. Didn’t support a minimum wage increase either.

The brains of people who are living proof that not all dumbasses voted for Trump. Appears to be spread by nose rings and other hipster accoutrement.