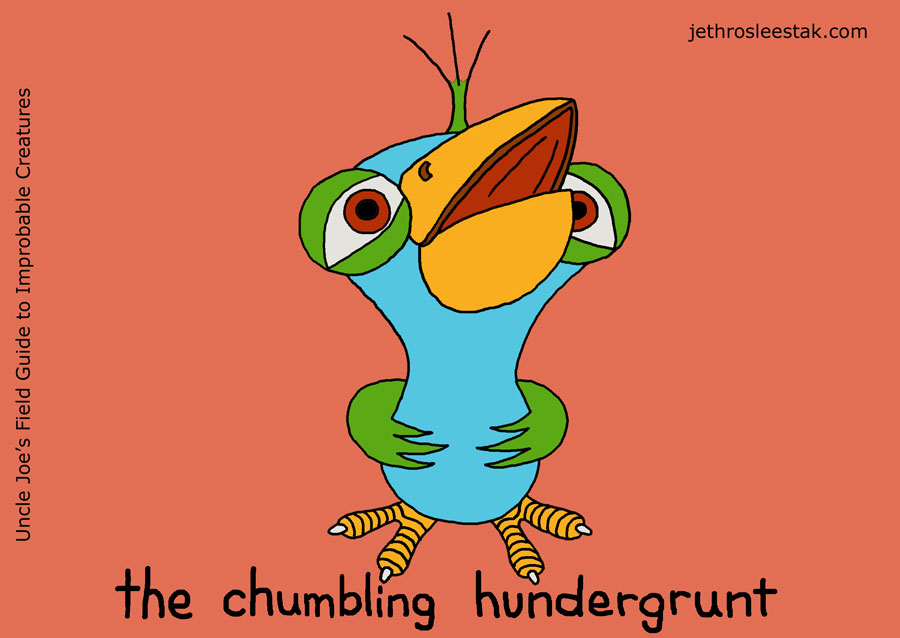 The Chumbling Hundergrunt is a sentient bird that sings bedtime lullabies in the voice of Marge Simpson. This genetically-engineered chimera was created by an eccentric billionaire as a vanity project, but the film industry quickly discovered how creepy the creature’s slow soft singing was when paired with the right images, and soon nearly every horror film and disaster film featured a song by a Hundergrunt.

The best known example is the theme song for the blockbuster “Titanic II: Reunion Under The Sea,” which is a cover of Elvis’s song “Love Me Tender” sung by a Hundergrunt.

Film critics have rightfully pointed out the nearly every movie featuring a Hundergrunt song is a complete piece of shit, but despite being unwatchable, these films have all done well at the box office. The consensus is that the success of these movies is due in large part to the soundtracks, specifically the contributions of the Hundergrunts.

But Hundergrunt songs have also improved movies that didn’t completely make you want to claw your eyes out. Certainly the cannibalism scene in Tyler Perry’s “Madea Goes To The DMV” would not have been half so haunting had it not been accompanied by a Hundegrunt singing “Twinkle, Twinkle Little Star” in its Marge Simpson voice.

The next time you get dragged to an irredeemably stupid chick flick, you can amuse yourself by imagining a Hundergrunt singing a kindergarten song while Jennifer Anniston’s character suffers some sort of violent accident filmed in slow motion. God knows I only made it through that cinematic turd “Mother’s Day” by imagining a bus accident that decapitated all three actresses while the Hundergrunt sang “The Wheels On The Bus Go Round And Round.”

The film sets of movies that should never have been made.