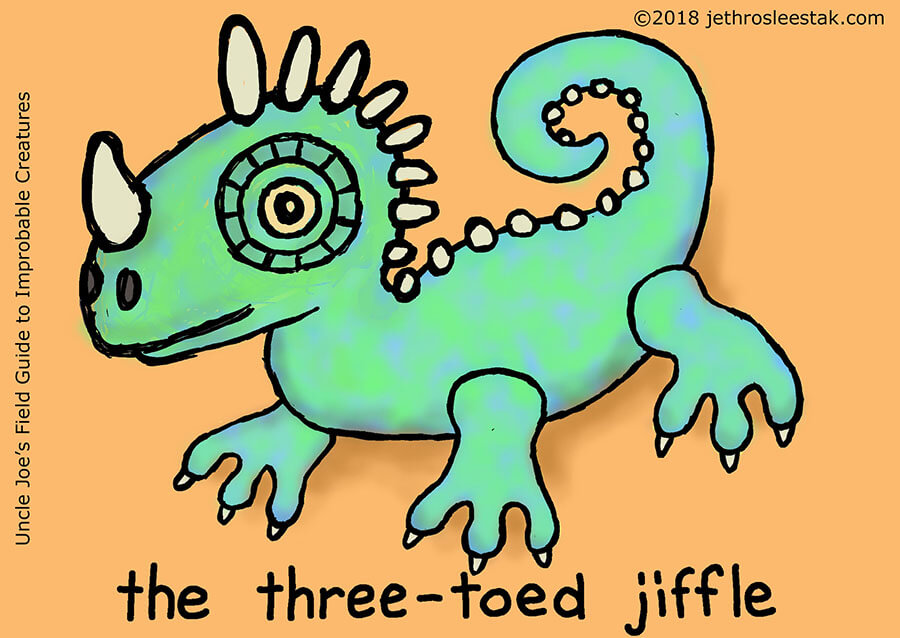 The Three-Toed Jiffle is the most important species of reptile known to science. Discovered in the rain forest near the headwaters of the Orinoco River in 1937, the Jiffle was just one more of the countless exotic species documented in the Amazon basin until scientists learned that its spittle had amazing properties.

A micro-dose of one part per trillion is enough jiffle-miffle to cause any person to instantly start blabbing their deepest darkest secrets. In fact, the subject cannot restrain themselves from confessing to every questionable act they have ever done, and no amount of military training or conditioning makes the slightest difference.

A single drop of Jiffle spit contains enough jiffle-miffle to dose both chambers of Congress, the Whitehouse, and the Pentagon.

Imagine Senator Mitch McConnell on live TV confessing to what a spineless piece of excrement he has been:

“I owe the American people a profound apology. I have put the interests of the Republican party above the country and the institutions of democracy.

“When the director of the CIA informed me that the Russians were using social media to influence the 2016 presidential election, I was more concerned with defeating Hillary Clinton than preventing a hostile foreign power from compromising our democratic processes. In fact, I even threatened the CIA director with false accusations if he ever made the facts about the Russian interference public.

“I am guilty of the lowest and most stupid forms of treason. Even though I despise Donald Trump, I cannot think in anything but partisan terms, and I did everything I possibly could to make sure that his nominee, that privileged sack of shit Brett Kavanaugh, was appointed to the Supreme Court, and I did so even after it was clear that he would not be respected as an impartial judge by at least half the country.

“Furthermore, I pressed tirelessly for his confirmation even after it was obvious that he was lying under oath to Congress about his drinking and that he could not maintain a judicial demeanor under questioning. I am the lowest piece of shit ever elected to public office, and I am truly sorry.”

In Mitch McConnell’s defense, it is entirely understandable that it would be extremely difficult for the Republican party to find an alternative nominee in their ranks who wasn’t a privileged piece of shit with a history of fraud or theft or lies or molestation.

Straight up Mitch McConnell’s ass, if there is a God in heaven.