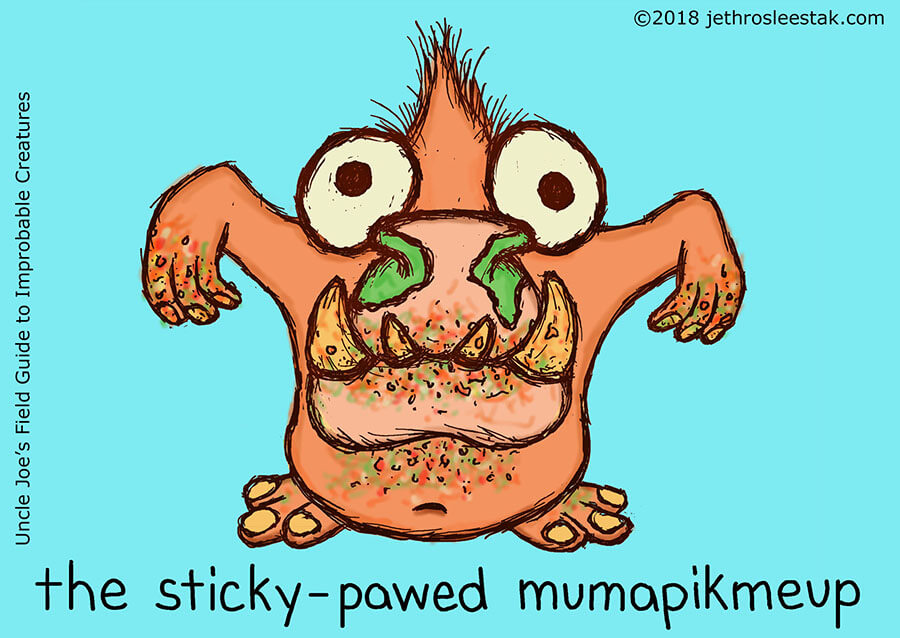 The Sticky-Pawed Mumapikmeup is the unholy creature that switches places with human toddlers in grocery stores. Their paws are coated with a mixture of snot, nacho-cheese-chip flavoring, sugary food residues,  condiments, and grease. And filth. Don’t forget filth.

Scientist tell us that the purpose of the stickiness is to collect filth, and that is why the Mumapikmeup is physically incapable of passing by things like ashtrays, piles of floor sweepings, and other sources of random filth without sticking in their paws, which are sooner or later put into the mouth. Scientist estimate that the average Mumapikmeup ingests over 1.2 pounds of random filth daily.

The Mumapikmeup loves to touch people’s faces and hair, but the creature will always go for the lenses of eyeglasses first, and it is usually successful in leaving a big greasy smear of orange cheedle that is large enough to effectively blind the unsuspecting adult in one eye.

There is no reward for picking up a Mumapikmeup, not if staying clean is any priority.

The Mumapikmeup’s name comes from the sound of its loud howling call, which it repeats over and over in the most distraught tones of voice possible, which vary between outrage and complete despair. While the Mumapikmeup trails the hapless mother through the grocery store, screaming and crying and moaning like the end of the world, its nose is invariably running with bright green or yellow mucous, which in turn coats the chips or candy that it is eating.

Grocery stores shopped by young mothers who never once questioned that their lives would be different and that they would never be tied down with screaming kids, even though they never once listened to an adult about anything.