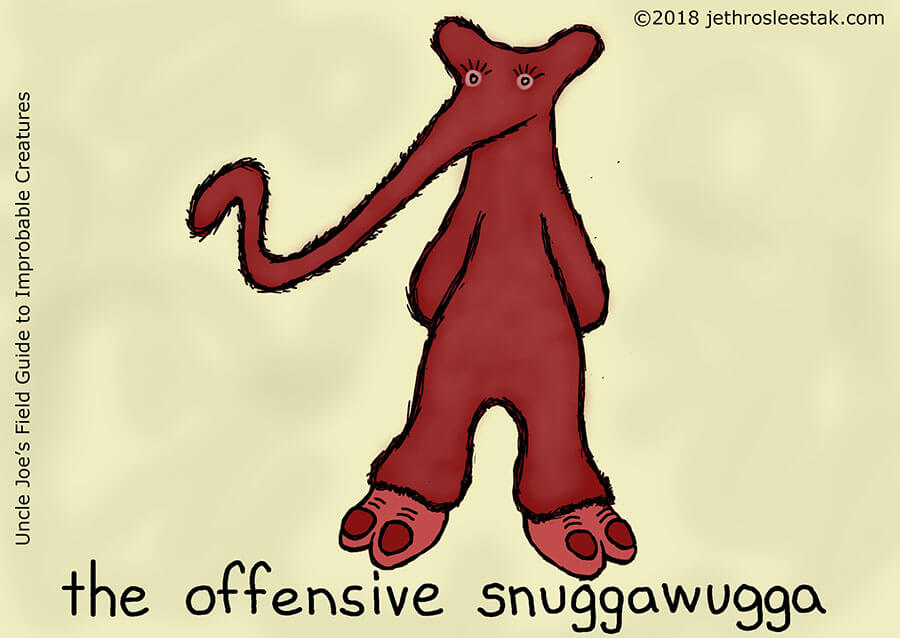 The Offensive SnuggaWugga is a living example of the importance of timing in scientific research. It was created by extra-terrestrial anthropologists to study the roller-disco subculture in Southern California in the 1970s.

The problem is that the anthropologists came from a planet called Blarf where the pace of life itself was glacially slow, and they deployed the SnuggaWugga in 2018 without even bothering to check and see if conditions had changed, never imagining that they possibly could have in such a short blink of an eye.

The SnuggaWugga has hidden rollers in the bottoms of its feet, and so it can skate like a child wearing skate shoes. But it doesn’t just skate. It boogies down as it skates and dances with long exaggerated sexual motions that involve its entire body, rubbing on as many passersby as possible, male and female.  And it doesn’t just rub its groin. The SnuggaWugga also uses it proboscis to fondle buttocks and breasts and stroke crotches as it rolls by.

The E.T. anthropologists designed the SnuggaWugga to be unaffected by mace and other chemical sprays used for personal protection because they figured that even in the 1970s Southern Californian roller-disco scene, it was bound to be maced sooner or later, possibly quite often.

Needless to say, the SnuggaWugga went over like a lead turd in 2018. The SnuggaWugga’s first skate down Venice Beach was its last, and some lesser-known Instagram model named Cathy Bathy was awarded the Blarf research team’s spaceship in the subsequent lawsuit. Thanks Michael Avenatti!

Cathy Bathy used the incident to take her fame to the next level and appeared on as many talk shows as possible to discuss her pain and suffering.

Initially Cathy was embraced by the media and the #metoo movement, until it became obvious that she was all about shameless self-promotion and a little less than sincere about her trauma.

The dead giveaway was when she hired a SnuggaWugga to reenact the incident with her to get better footage for a sex tape/music video she released, but by then the cause of women’s rights had been set back decades.

If you watch the video, pay attention to the quick cut to the SnuggaWugga’s face right at 2:20 or 2:21 or so. It only lasts for a second, but you can tell he is so bored and tired.

As soon as he makes eye contact with the camera, it cuts right back to her grinding her crotch on his leg and shots of her overacting the orgasm with her face like she is going for an Oscar. Most of the video is that, but every time it cuts to the SnuggaWugga, you can tell he just isn’t into it.

That sex club out by the airport.