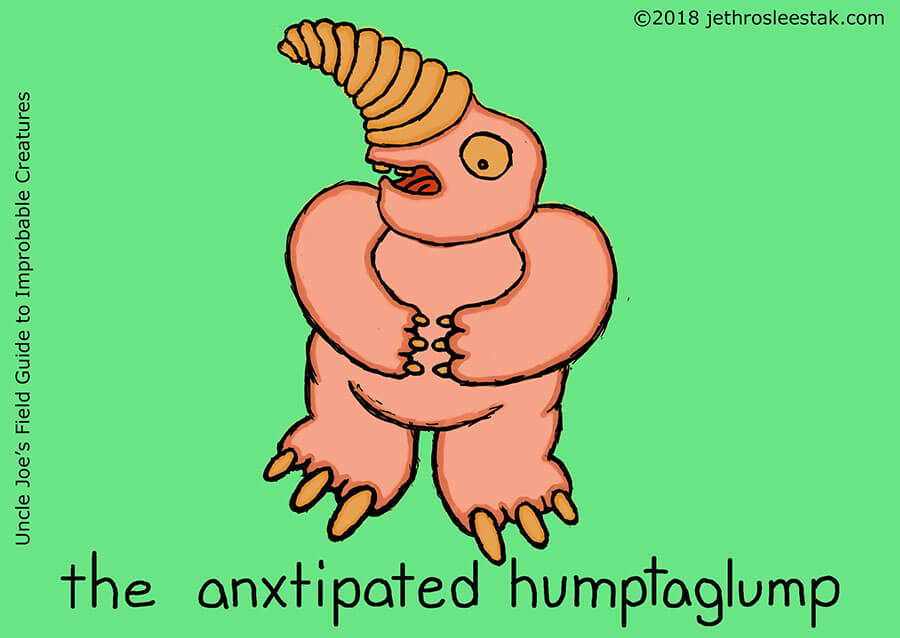 Of all the abominations created by mixing naked-mole-rat DNA with the human genome, the Anxtipated Humptaglump is probably the worst, and not merely because of its annoying habit of defecating on pets and small children. No, the worst thing about the Humptaglump is its personality.

The Humptaglump is simultaneously worried by every last little detail that could possibly go wrong while at the same time overwhelmed by the pointlessness of everything. (Essentially, it has the same outlook as any stressed-out engineer working in a cubicle anywhere.)

Thankfully, the Humptaglump speaks a language no one understands, and so you don’t have to listen to it, unless you spring the extra $17.50 for the translator app, but why would you?

Genome engineers made the Humptaglump to recycle old mattresses by burrowing into them and eating the sweat-saturated foam and stained fabrics and old pubic hairs and filth, and so the creature can handle a lot of grossness, but it cannot eat at Arby’s without becoming violently ill.

Wherever they take all the mattresses that people leave on the side of the road all the time. You know, that gully behind the strip mall out by the airport. That’s where the Mattress Fairy makes her nest.