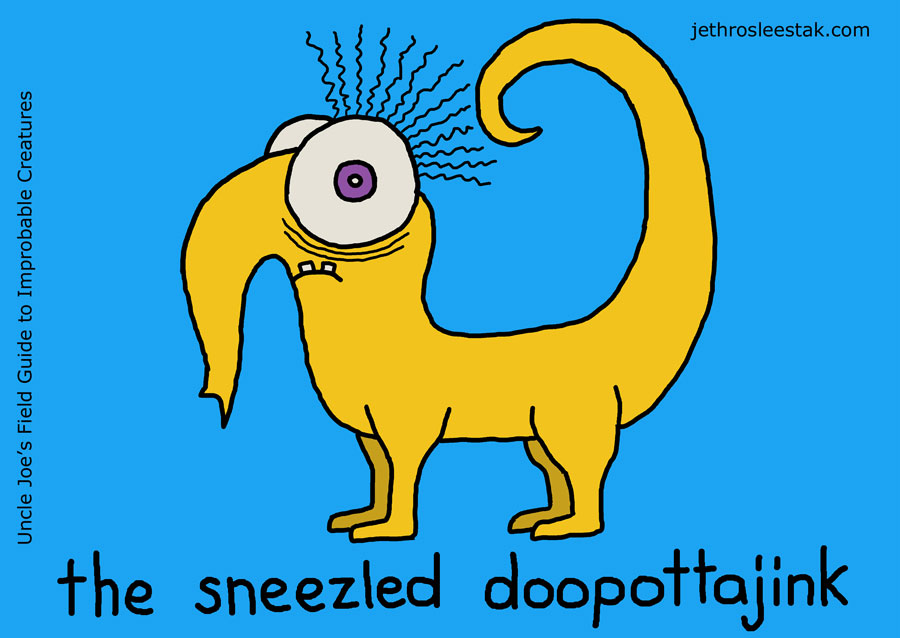 The Sneezled Doopottajink’s role in Lithuanian folklore and history cannot be overstated. These majestic beasts were ridden into battle there until the introduction of the horse during the reign of Olaf the Unsniffable sometime near the end of the 12th century. It is said that Lithuanian knights would perm or “sneezle” their hair into mohawks in imitation of the Doopottajink’s frizzy mane.

Sneezled Doopottajinks are easily spooked and can only drink from water that is flowing or rippling because if the animal sees its reflection in still water, it will panic and gallop away snorting and leaping into the air. One of Frederick Remington’s most iconic paintings of the American West is the great “Doopottajinks on the High Sierra,” which depicts an Apache brave trying to calm a rearing Doopottajink by offering it a cone of frozen yogurt.

Cheese made from the Sneezled Doopottajink milk is high in polyon glyptamodes and can be used to deworm dogs and cats.

Variable terrain ranging from open tundra to northern temperate forest to sierra, but limited to locations near frozen yogurt stands.

This trading card is part of a series titled “Uncle Joe’s Field Guide to Improbable Creatures” by Jethro Sleestak.