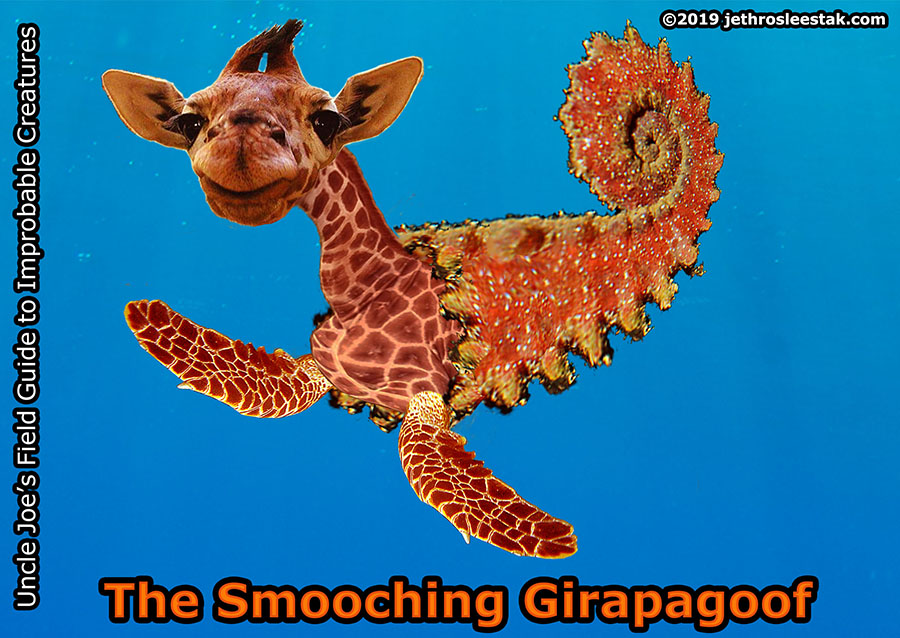 The Smooching Girapagoof is known for molesting burly male bathers at beaches. Not only will the Girapagoof sneak up on big hairy men and slip them the tongue, it will also grab onto slower swimmers with its flippers and hump them aggressively as they flee.

The Girapagoof genome is part giraffe and part plesiosaur and part grope machine, and it wants to date a bear.

No one knows who engineered this creature or for what purpose or why it is so sexually attracted to human males of the big and burly variety. Forensic Ecologists speculate that it was probably just the usual Japanese weirdness, maybe something for one of their game shows.

The creature’s tail borrows heavily from the octopus genome and can be used for swimming and groping.

In 2043, the state of South Carolina passed “Billy Wayne’s Law” allowing beach goers to be armed with sawed-off shotguns provided the guns are used only in self defence against attacks from what the bill refers to as “homosexual sealife and other abominations.”

Texas soon followed in 2044 with “Jim Bob’s Law” and their clunky ad campaign “Swimming in Texas Will NOT Make You Gay,” which was launched in response to what supposedly happened on Padre Island to a vacationer from Oklahoma.

Basically what happened was this guy Jim Bob’s wife caught caught him making out with the cable repair guy, and Jim Bob “blamed” his homosexuality on getting humped by Girapagoofs while on vacation on Padre the year before.

All fourteen docudramas made about the Jim Bob story point out that his wife Tammy was a complete bitch, even the one made by the Lifetime Channel.

When the Texas state legislature debated “Jim Bob’s Law,” Democrats tried to argue that the Girapagoof had never been seen in the Gulf of Mexico, which was true, but they were shouted down by Republicans who said that the Democrats were trying to “force a gay agenda on the people of Texas.”

And that is why local communities in Texas are not allowed to ban assault rifles from public beaches.

The waters off the many gay beaches of Texas, Oklahoma, and Nebraska. According to Fox News.