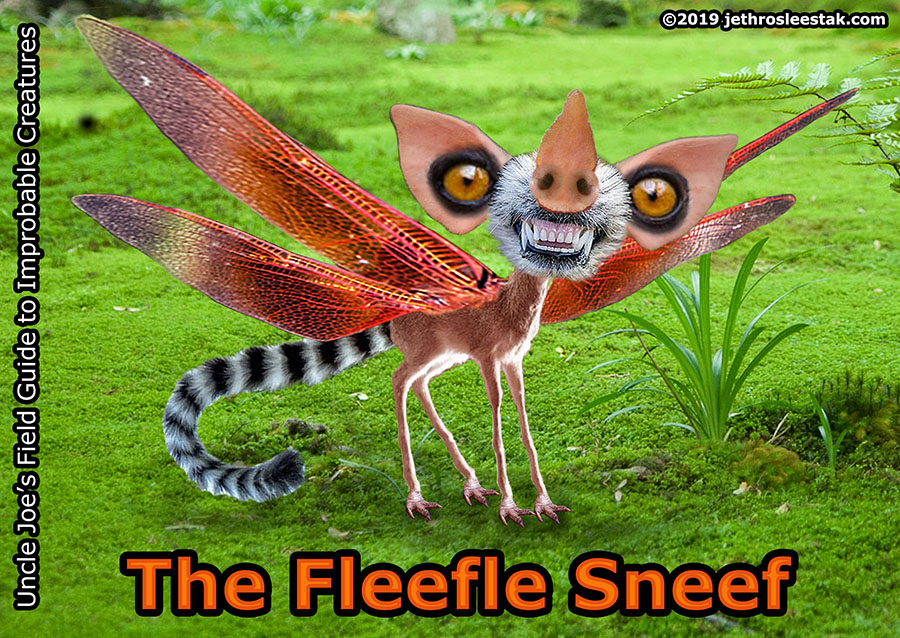 The Fleefle Sneef is yet another tiny fairie creature from Irish folklore. The Fleefle Sneef’s bite was said to cause earaches, but the creature usually went for the earlobes and was repelled by the color blue. That is why people in Ireland still paint their ears blue on the eve of Saint Commacho’s Day. Look it up.

Contrary to popular belief, the male Sneef does not build its nest exclusively from discarded earphone cords found flattened in roadways. The male Sneef will also decorate his nest with cigarette butts and chewing gum wrappers and discarded hair ties. That is how he attracts a mate.

When a female Sneef selects him, she will lay exactly one single egg in the nest, from which will hatch any number of Sneefs. No two accounts agree how many Sneefs emerge, with some estimates in the thousands, depending on how intoxicated the teller, but they all insist that is only one egg laid. Hence the scarcity of the egg in all the myths and sagas that refer to it.

The dried powder made from the egg of the Fleefle Sneef can be used to cure a range of conditions including dyslexia and tourette’s syndrome, but it must be finely crushed and snorted to be fully effective. Injecting extracts made from the egg is referred to as “Sneefing” and is banned in the UK and Northern Ireland.

The bathrooms of older gas stations and convenience stores, the ones with sticky floors and very loud deodorant smells and the reek of accumulated urine.