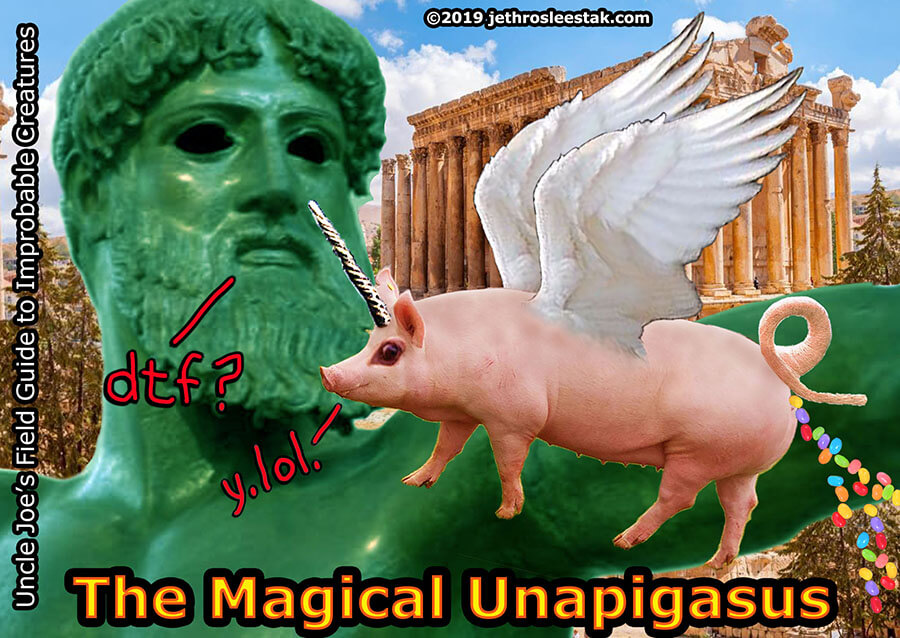 The Magical Unapigasus does not shit rainbows or Skittles brand candies as the ancient Greeks believed. Instead, it shits jelly beans, the shitty kind with no flavor that go straight from the Easter basket to the landfill.

That is why the god Zeus transformed into a walrus and had sex with the Unapigasus. He was hoping his divine attentions would cause the Unapigasus to shit something less gross. It was an act of charity on his part.

At least that is what he told his wife the goddess Hera when she asked why he had done it.

According to Greek mythology, it was just the opposite: the Unapigasus used to shit Skittles and gummy bears and even M&Ms until it was violated by Zeus in the form of a walrus. Only then did it start shitting the colored no-flavor sugar blobs that nobody ever eats given a choice of candies.

Greek myth tells us that the Unapig lost the ability to shit flavor of any kind because of an STD that Zeus had picked up from a shepherd boy he fucked while in the form of a shrubbery.

Not every jelly bean goes straight to the landfill. Some are vacuumed out of toy boxes a year or three later, hard as bullets.

The percentage of people who have ever eaten a jellybean without wishing they would have eaten some other type of candy instead is exactly ZERO%.

The parking lots of dollar stores and low-end strip malls.