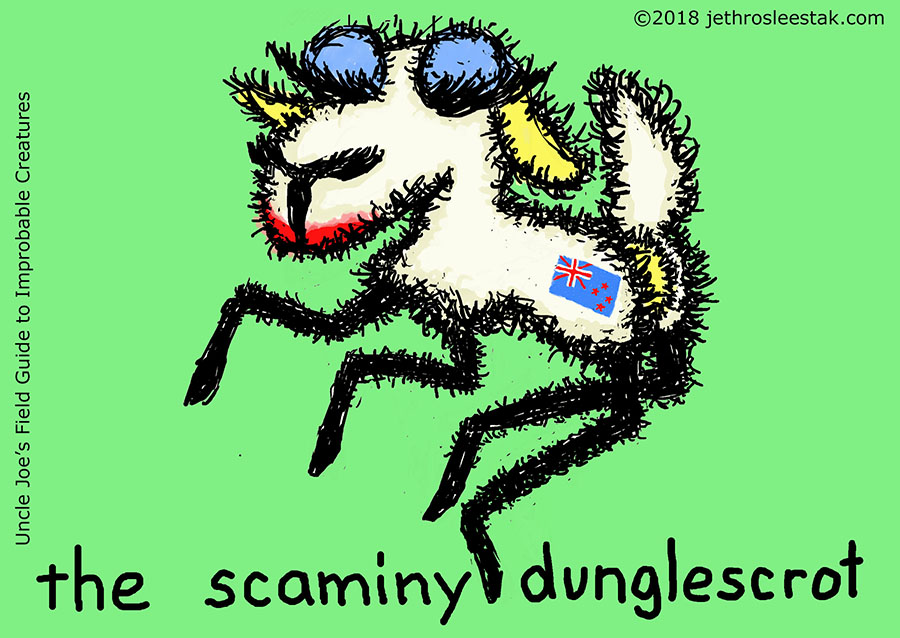 Needless to say, the sexist mascot was not well received at home or abroad, and effigies of Scaminy Dunglescrot were burned in street protests around the world.

The International Olympic Committee condemned the choice of mascot, and it was eventually changed by the New Zealanders to “Bert the Inoffensive Generic Bird not Kiwi,” who was introduced at the 11th hour after weeks of debate over whether or not the kiwi bird was inoffensive to all parties and not reaching a consensus.

But the original Scaminy mascot had already been reproduced on hundreds of millions of  tee-shirts and hats and hoodies and towels and all types of junk, most of which had designs that emphasized the hyper-cliched sexuality of the anthropomorphised sheep.

The IOC couldn’t stop the fans from bringing all that crap into the stadium with them, and so Madame Scaminy’s offensive image was there in force every time the camera showed the crowd. Then some of the beer and pot sponsors thought they saw an opportunity to be edgy and started running the original advertisements they had created using Scaminy.

The news networks all but discontinued coverage of the Olympic events and began 24-hour coverage of celebrity politicians shouting at each other about the mascot and how inappropriate and awful it was, and the story later won an Emmy for “Highest-Earning Content Generator of the Year for a Subject Which Allows People to Act Self Righteous and/or Say Pompous Things.”

Why was this awful sexist mascot ever selected in the first place? Why would anyone from  New Zealand want to make references to tired shitty jokes about bestiality with sheep?

After the assassination of the entire New Zealand Olympic Hosting Committee, the world would never know.

We don’t even know for sure if the assassination was the work of the ultra-violent #grannysdaycare4tots or the more infamous #ldscarpoolmaplestreet.

And why did the assassins use waffle-delivery drones to set off an overly-complicated Rube-Goldberg machine instead of using an infinitely simpler and more reliable method like a sniper?

Why did it have to be a flagpole falling straight onto the stage only after a bowling ball rolled down a gutter to land in the nacho machine splashing cheese onto the concession stand’s bug zapper thus setting off the sprinkler system to set off the rest of that busy nonsense?

Conspiracy theorists assert that it was so they could put it in the movie version.

Conspiracy theorists also say that the choice of mascot and the assassinations were part of a larger manufactured scandal to distract the public from widespread soylent green shortages. And to manipulate the Emmys.

The Scaminy Dunglescrot lives on in perpetuity in the form of horrible tee-shirts, horrible souvenirs, and in all the court documents from all the lawsuits.