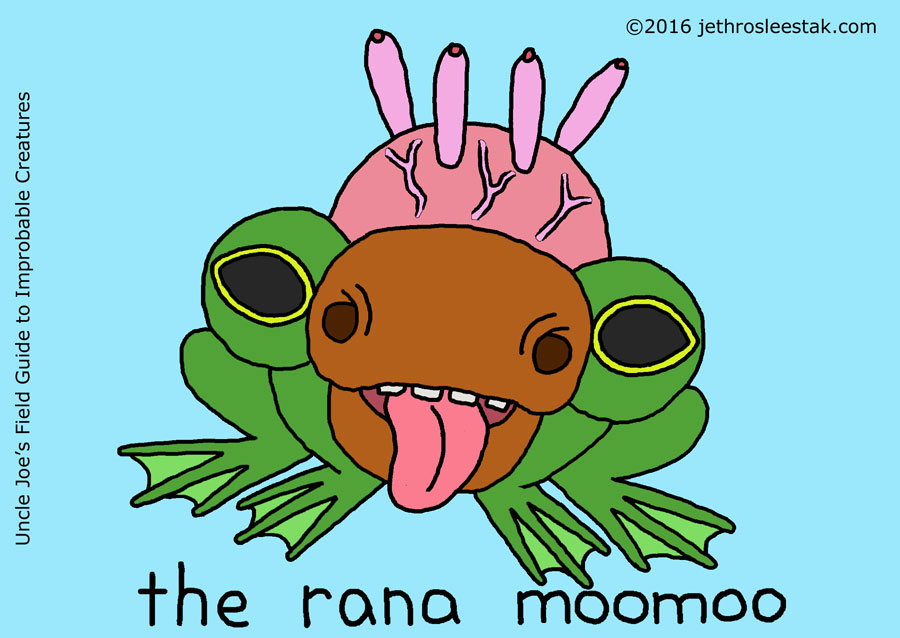 The Rana MooMoo or Common Cowfrog is a successful yet gross example of genetic engineering used to increase food production while reducing greenhouse gas emissions.

Since cows emit about 100 to 200 liters of methane per day, and since dairy foods are so important to most human diets, an animal such as the Rana MooMoo has obvious value.

As Texas A&M professor, Dr. Buford T. Bohanon said, “We don’t need a half-ton cow, just a 30-pound frog with an udder full of tits on its head. I tell you, this is one of the true miracles of science. Makes me proud to be a cow engineer. You wanna see the manatee we got out back? We put tits on its head too.”

The release of the Rana MooMoo was a classic good news/bad news event. The good news was that the MooMoo could eat anything and live anywhere that stayed damp. The bad news was that shady operators began raising the things in municipal sewer systems and selling their produce clandestinely. Many people fell ill.

As the US Surgeon General warned, “You have never been so sick as when you eat some frog butter that came from animals raised in the human wastes of Cleveland, Ohio.”

Milking a Rana MooMoo with your bare hands will not give you warts, but you will probably never ever be able to bring yourself to eat GMO dairy products again.

Storm sewers and other dank places with a flatulent smell.