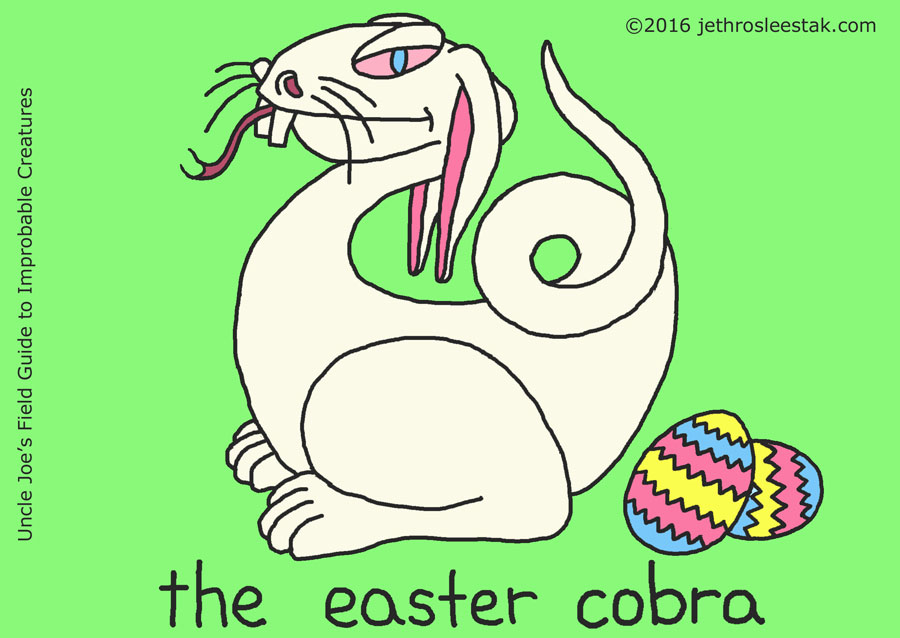 The Easter Cobra or Bitey Rabbit was genetically engineered by SinoBeast Shanghai Limited for retro-fetish hipsters (RetFets) in the North American and European markets. RetFets use the Easter Cobra to celebrate their neo-pagan fertility rites.

What can be more exciting than dressing up in hot sweaty 1970s polyester church clothes and hunting for colorful eggs in the tall spring clover? How about getting bitten on the hand by the Easter Cobra and injected with its hallucinogenic venom and spending the rest of the day nude and dancing ecstatically and having group sex in piles of writhing bodies right on the ground?

Yes, the Goddess moves in mysterious ways, especially when you are tripping your balls off so hard that you paint magic symbols on your butt and end up having sex with things like the car door and the hedges in front of the elementary school down the street. “Mommy, why doesn’t that man have on any clothes, and what is he doing to the shrubbery?”

The endless hard erections caused by the Bitey Rabbit’s venom turn the penis a bright orange color that lasts for days afterward, at least if the creature has been eating its normal carrot-heavy diet. The discoloration of the victim’s genitalia comes from the heavy concentration of carotenoids in the Bitey Rabbit’s venom, which are deposited in the skin covering erectile tissues, wrinkles, and other places prone to stretching. The penis really is the same color as a carrot because it has carrot pigments in it.

The mind control drugs that Putin’s agents used on President Donald Trump are believed by Venomists to have been derived from Bitey Rabbit venom. Venomists point to Donald Trump’s weird orange coloring and the fact that their theory explains his behavior better than any other.

The grounds of urban churches with progressive congregations who now regret answering that ad on Craigslist and leasing their sanctuary for what had been described as a “Sacred Celebration of the Vernal Equinox” but had in fact left so many bodily fluids on the lawn that it killed the grass.