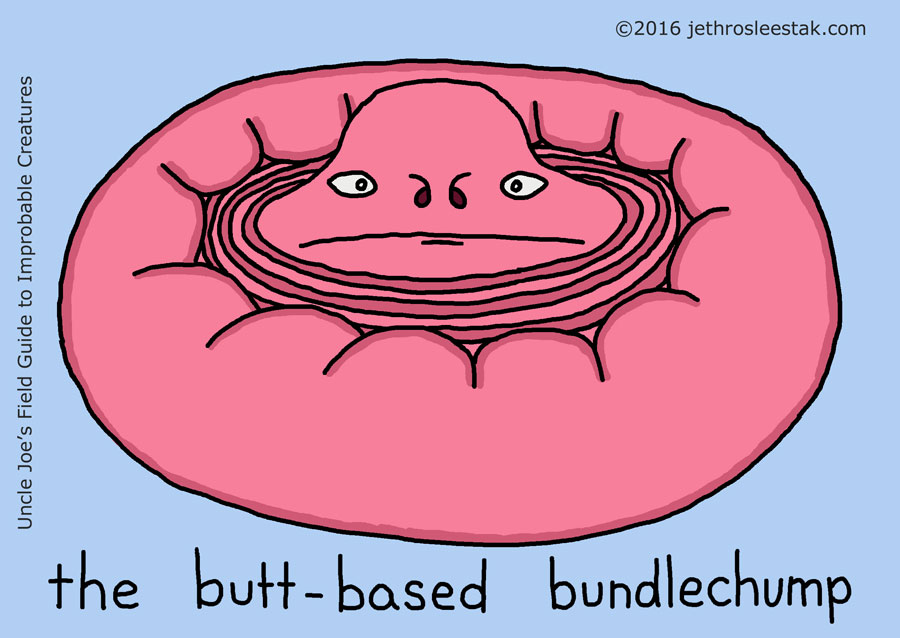 The Butt-Based Bundlechump lives in its own sphincter and looks like a pink rolled-up condom only slightly smaller.

The Bundlechump keeps up with the news and can tell you why Hilary Clinton was the most evil politician that ever lived, worse than Hitler or Stalin. The Bundlechump has detailed information and theories about all sorts of news events, all derived from highly partisan sources, sources more actively concerned with manufacturing a world view than reporting information.

For that reason, the Bundlechump views any inconvenient piece of information as a lie, including basic facts from an authoritative textbook or encyclopedia. On the other hand, any claim made by the right-wing corporate media is gospel. Clean Coal is as real as Jesus. The Chinese made up Climate Change.

Well, at least that is the Bundlechump at it mature phase. The Bundlechump starts out innocently enough, but once your TV convinces you that a guy having an affair with his intern was the most irresponsible and most disgusting act ever, and was so much worse than any of the previous presidential affairs, then I guess it could convince you of just about anything.

That’s sort of what happened to the Bundlechump. Most of what the Bundlechump knows about the Clintons is somewhere between the Vince Foster “assassination” and Pizzagate in terms of lacking basis in fact, and the rest is distorted in perspective one way or another.

The Bundlechump soon gets flustered and retreats into its anus if you attempt to disagree on a point of information, so good luck trying to argue with twenty years of Fox News and radio rant. Basically the Bundlechump behaves as you would expect someone to behave if their greatest intellectual input was tabloid news from the largest media corporation on the planet.

The Butt-Based Bundlechump reproduces from a sphincter-like orifice on its forehead. Its offspring resemble small pieces of feces until molting from the larval stage to the adult stage.

Naturalists believe that the larvae’s fecal appearance help disguise it from predators. As David Attenborough once said, “What’s more natural looking than small pieces of shit surrounding an asshole? But if you listen closely, you can hear the little pieces of shit saying the same shit as the asshole in the middle. It’s one of nature’s miracles.”

Shitty jobs where people who have read the least of anyone in the building talk nonstop about politics.