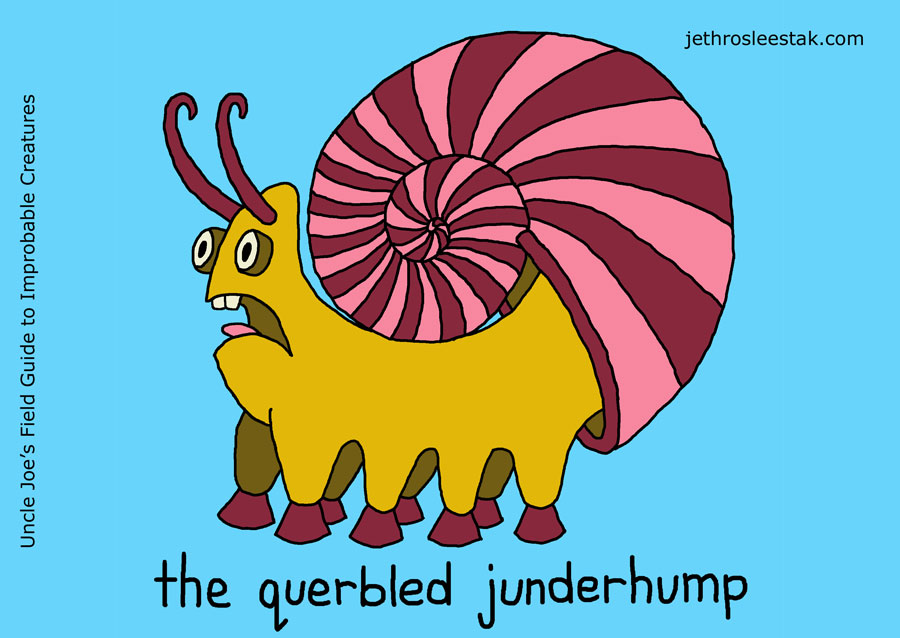 The Querbled Junderhump is testament to just how cruel humans can be. Genetically engineered to be a replacement for hard peppermint candy swirls, one that grew itself and came ready to eat, the Junderhump has a swirled colored shell that is crunchy and filled with the creature’s sugary innards and peppermint-scented secretions.

The idea was that people could just see one climbing up a wall somewhere, pull it off, and chew it up and eat it. (Yes, the company that created it was  Japanese.)

Market research indicated that most western consumers wouldn’t eat a live creature if it were slimy, and so designers at Japan’s GenetiFood spliced the Junderhump’s snail DNA with octopus genes to give the new creature suction cup feet known as querbles. The Junderhump’s querbles are just as effective for sticking to surfaces as having a body covered in snot, but they are not nearly as gross, and they allow the creature to crawl up walls like a snail for convenient harvesting.

To overcome people’s reluctance to chew up a living creature, GenetiFood found that making people hostile to the creature via annoying sounds was more effective than anything else. Early releases of the Junderhump made cries that sounded like profanity. Releases 4 and 5 made cries that sounded like derogatory racial slurs, and there were complaints, but release 6 was when it really went too far.

Release 6.0 of the genome was modified so that the Junderhump’s terrified shriek now sounded like the annoying laugh made by Fran Drescher’s “The Nanny” character, and people overreacted when they heard it, went a little crazy even. When release 6.0 first came out, there were riots. Animal-rights activists were filmed stomping live Junderhump in the street and screaming things like, “Fine! Just fine then! Just kill the damn things then!”

In an effort to salvage the situation, the designers at GenetiFood tried making the Junderhump’s cry sound like a laughing Urkel from the sitcom “Family Matters” (release 6.1) and then a laughing Gilbert Gottfried (release 6.2), but people hated those versions almost as much as 6.0. All three versions are now invasive pests world wide.

Of all of Bill O’Reilly’s many lies and distortions, none have anything to do with the Querbled Junderhump. It is as if the creature is somehow protected from misinformation, while basic scientific facts and the public record are completely fluid and can be changed at will.