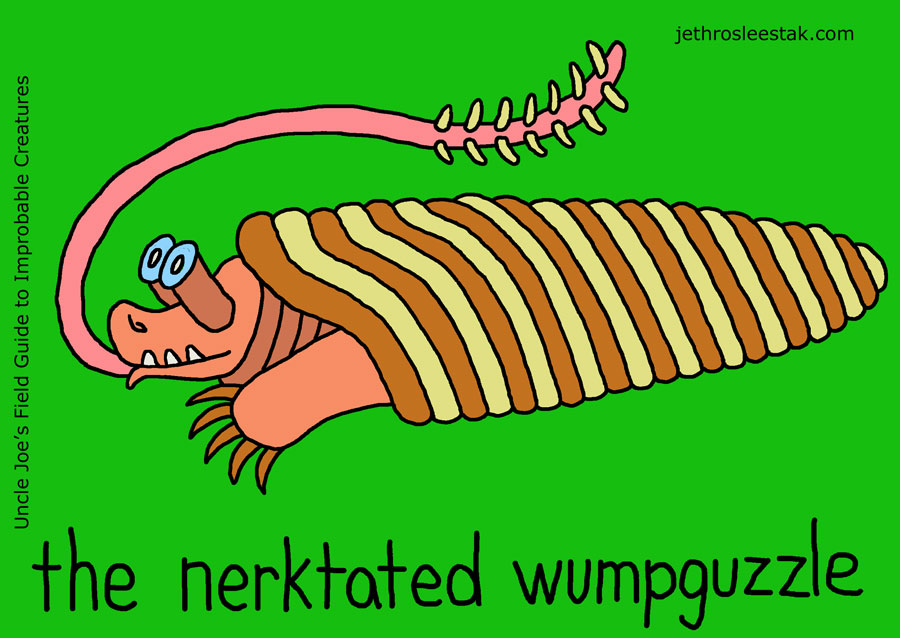 The Nerktated Wumpguzzle appears to be an innocent sea creature at first glance, but everything about it is off color. Stop reading now.

The ancient Greeks referred to the Wumpguzzle’s “nerktated” or ribbed shells as “tongues of Zeus.” Young brides in ancient Greece collected empty Wumpguzzle shells and kept them for use when husbands were away at war. In The Odyssey, Homer says that Odysseus’s wife Penelope “wore out four score and ten | before she felt the D again.”

And then there is the fact that the creature has a tongue that is almost as long as its body. That wasn’t lost on the ancients either. You don’t want to know what all the lyric poet Sappho of the isle of Lesbos had to say about the Wumpguzzle’s tongue. Let’s just say that when Sappho wanted to get down and raunchy, the Wumpguzzle came up sooner or later.

Often in her poetry, Sappho imagined herself a Wumpguzzle accidentally sat upon by a maiden bathing at the beach. Sappho’s famous odes “What I Wouldn’t Do” and “Yeah Baby” are good examples of what I am talking about.

As far as making things a little less juvenile, boring-ass science is no more help than mythology and literature. Biologists tell us that the Wumpguzzle uses its absurdly long tongue to probe the blow holes of buried clams and feed via a peculiar method of stimulation. The Wumpguzzle vibrates its tongue inside the clam until the clam spits up its half-digested pap in a series a rhythmic contractions that Dr. Ruth would be proud of.

A man was recently arrested at New York City’s JFK International Airport for attempting to smuggle over 15 Wumpguzzle concealed in his pants. Customs officials became suspicious when the man began to “freak out and dance around like he was possessed or some shit.” Apparently the masking tape the man had used to tape the creatures to his thigh had worked loose, and one of the Wumpguzzle had stuck its tongue up the man’s ass.

The Mediterranean Sea, the Red Sea, and coastal shallows of the Indian Ocean.