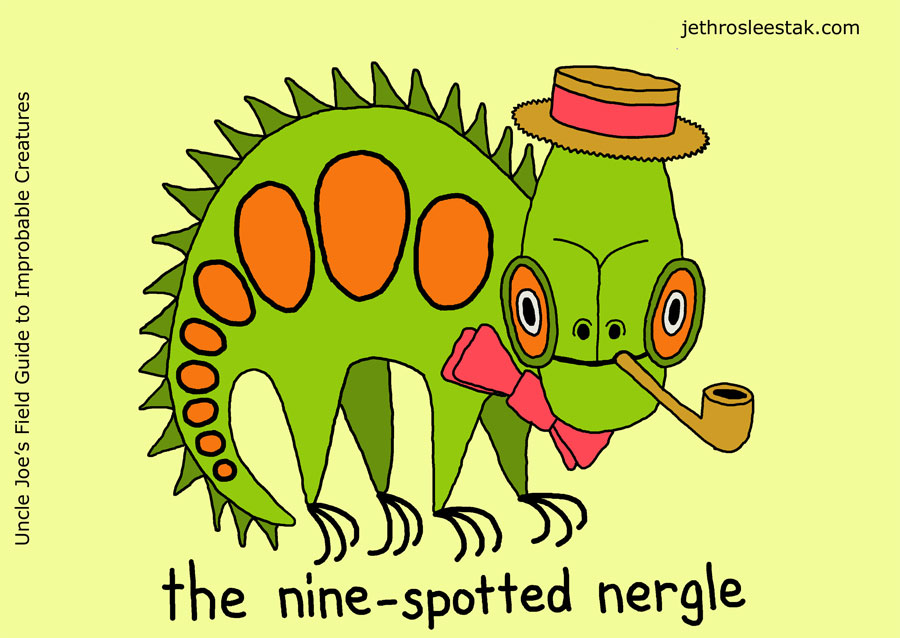 The Nine-Spotted Nergle are sapient lizards that ride on people’s shoulders and explain to them what blockheads they are being.

The Nergle were genetically engineered to help adult children compensate for having had little or no parenting, or at least that was the idea, but the creature didn’t work out as expected. The problem is that the Nergle are so much brighter than the thoughtless teenagers and twenty-somethings they ride upon, and the frustration of witnessing all the endless stupidity makes these creatures a little sarcastic:

“Sure, why not send her an email? You’re drunk, and it’s 3am, and she was mad as hell at you yesterday, but what could possibly go wrong?”

“Are you trying to break everything in that bag? Why don’t you just throw it down the stairs a few times in case you missed one?”

The Nergles don’t give a hoot if what they have to say offends people who can’t be bothered to use the brains God gave them. The Nergle’s speech is filled with down-home expressions and rural working-class wisdom:

“If the tote frog had wings, he wouldn’t bump his ass ever time he took a hop.”

“You can’t polish a turd, but that won’t stop the government from trying.”

“If at first you don’t succeed, then sky diving’s not for you.”

Releases 1 through 6 of the Nergle are all old school. They wear old-timey straw hats and bow ties and smoke pipes, and they tend to talk like they eat cornbread on a regular basis. More recent releases of the creature have targeted various ethnicities and demographics, and now many specimens can be seen in hoodies and tees, especially in urban areas.

My Nergle wears a working-man’s dusty sombrero and whispers to me in his Mexican-accented Ingles, “Chure, Senior Jethro, chure you can do dat. But why you wanna prove you a dumbass for de millionth time?”

The first Nergle given to Miley Cyrus by her father committed suicide after only three days by attempting to swallow its own tail. The second went on to write the New York Time‘s best-seller expose Hollywood Nergle.

I hate the movie version of Hollywood Nergle. The Nergle they got to play Michael Cera’s Nergle is all wrong. In the audio book, he spoke more like a Jersey tough guy, and Shia Labeouf’s Nergle acted circles around him, IMHO.

The shoulders of celebrities, busy people, people without the sense God gave a jackass, people who should know better and listen sometime but don’t.