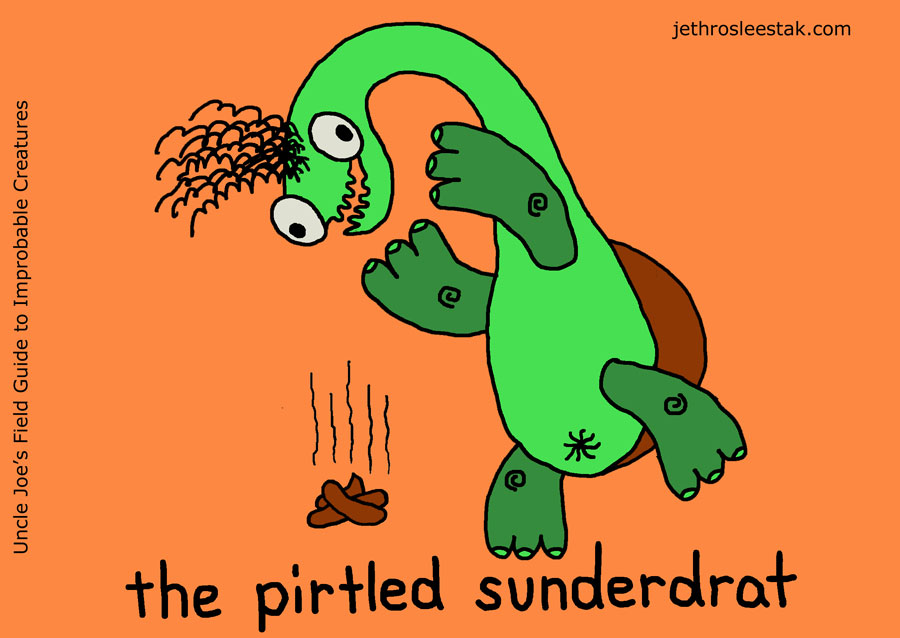 The Pirtled Sunderdrat was genetically engineered to be a companion pet for lonely artists and writers, and thus these creatures were given creative impulses and manic-depressive tendencies so that they could relate to their owners. The problem is that the genetic engineers overdid it a little bit, and the Sunderdrat is continually enchanted then disgusted with everything it makes.

This creature literally falls in love with its own feces and will dances around a pile of it in ecstasy, dancing and singing, waiting for the world to come adore what it has made. Then, as time passes, the Sunderdrat sees its turds for what they really are and sinks into a black funk that lasts until the creature has to poop again. Or make art. It’s the same way with the Sunderdrat when it makes art.

The Sunderdrat will stay up all night and paint what it considers a masterpiece, something right up there with its favorite painting by Chagall or Franz Marc, but then it will go to sleep and wake up the next day, and poof, like fairy gold, the masterpiece has turned back into straw -or rather, an overworked acrylic nightmare painted in garish colors.

Most public artwork is actually created by Pirtled Sunderdrats as a first draft, and that is why it stinks to high heavens. That, and the fact that the artwork was commissioned by a committee of bored patrician housewives playing favorites with people who sucked up to them.

If you visit a hospital ward for terminally-ill children and see a soulless mural of abstract geometric shapes and wonder why the hell they wanted to make the place more depressing than it already was, you can be sure that is what happened.

The cheap apartments of aspiring artists struggling to make something that lives up to their own high standards.