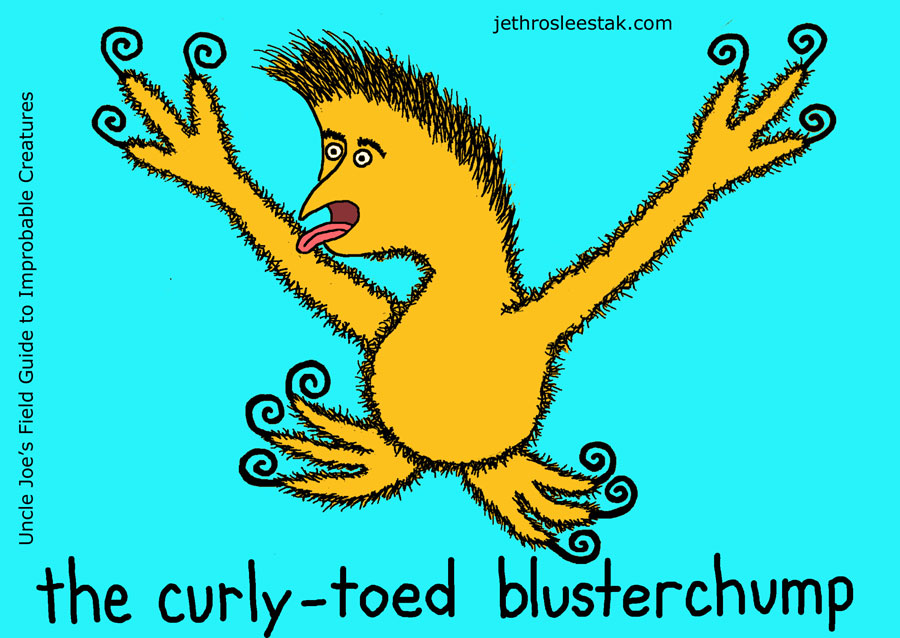 The Curly-Toed Blusterchump is a tiny creature that was genetically engineered to live inside the ear canals of dysfunctional people of a certain personality type.

The Blusterchump’s intended hosts are those people who are always auditioning to play the panicky idiot in the disaster movie, those people whose lack of emotional control is matched by an inability to deal with the unexpected.

Freaking out and crying just because you missed your exit on the interstate and having similar spasms of emotional idiocy all day long take a lot out of a person, and sometimes these people get worn out and just can’t keep up their usual level of masochism. They start slacking off and not giving trivial setbacks their usual level of hysteria.

Fortunately, the Blusterchump acts as a personal “freak-out cheerleader” and quickly restores these type-A idiots to their about-to-have-a-stroke level of panic. The Blusterchump does this by whispering reminders of all the things that have gone wrong and all the many things that are likely to go wrong.

The Curly-Toed Blusterchump likes to sing a mantra in between its personalized disaster bulletins:

When in trouble, when in doubt,
run in circles, scream and shout.

When put into positions of management or supervision, people with Blusterchumps living in their ears often create an environment of busy, noisy inefficiency with many assignments being made in a knee-jerk or emotional fashion. Fear is the mind killer, and the Blusterchump wields it like a sword.

People who were highly-competitive academically are ten times as likely to have a Curly-Toed Blusterchump living in their ears than people whose grades were less than stellar.

The ears of people who bring it on themselves due to a lack of perspective and others who merely have too many responsibilities to keep track of.