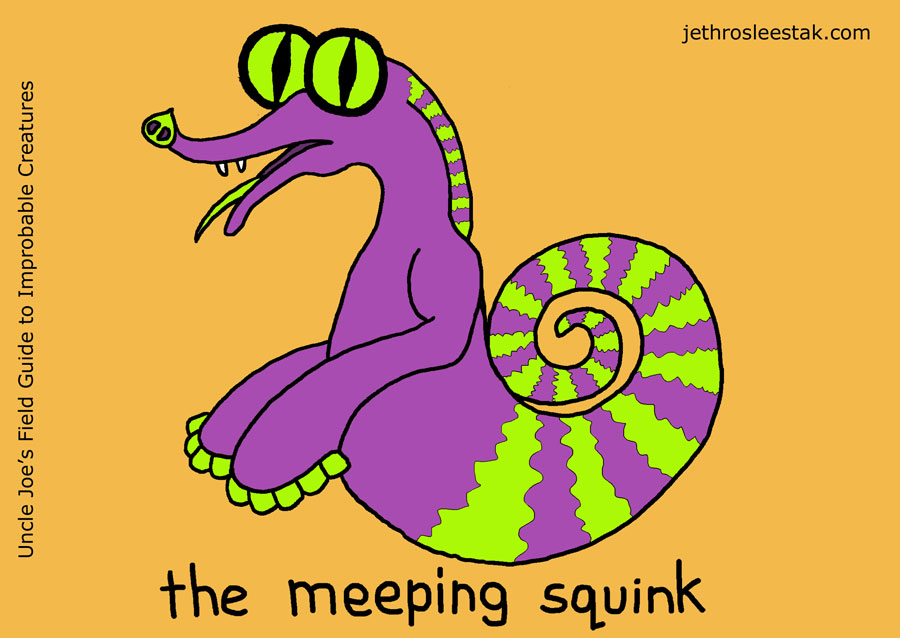 Part seahorse, part mudpuppy, part mole, the Meeping Squink was genetically engineered to burrow into clogged residential sewer lines. This creature was highly effective for its intended purpose, but escaped specimens established wild populations in municipal sewer systems, and now these “Sirens of the Sewers” are responsible for at least 15% of all heart attacks in North America.

The problem is that the Squink “meeps” shrilly and loudly when it is disturbed, and this literally scares the shit out of people sitting down on the toilet in the middle of the night. Some of these half-asleep people understandably have heart attacks while screaming things like “Oh My Fucking Jesus!” and “God Almighty Fucking Shit!”

It doesn’t help that the normally-dark Squink has bioluminescent stripes that it pulses rapidly while it meeps, and these flashing stripes make the Squink look more like an emergency vehicle gone spastic than an animal.

The term “Siren of the Sewers” was coined by the council for the plantiffs in the class-action lawsuit. Attorney Festus Blepto argued that his clients “could not have been any more terrified had an am-bu-lance came screaming out of their toilets straight at their bare and vulnerable anuses, your honor!”

The ancient Babylonians believed that the Meeping Squink transported the souls of the dead to the underworld provided they had a diet high in fiber. That is why all Babylonian toilets were inscribed with the following chant in cuneiform: