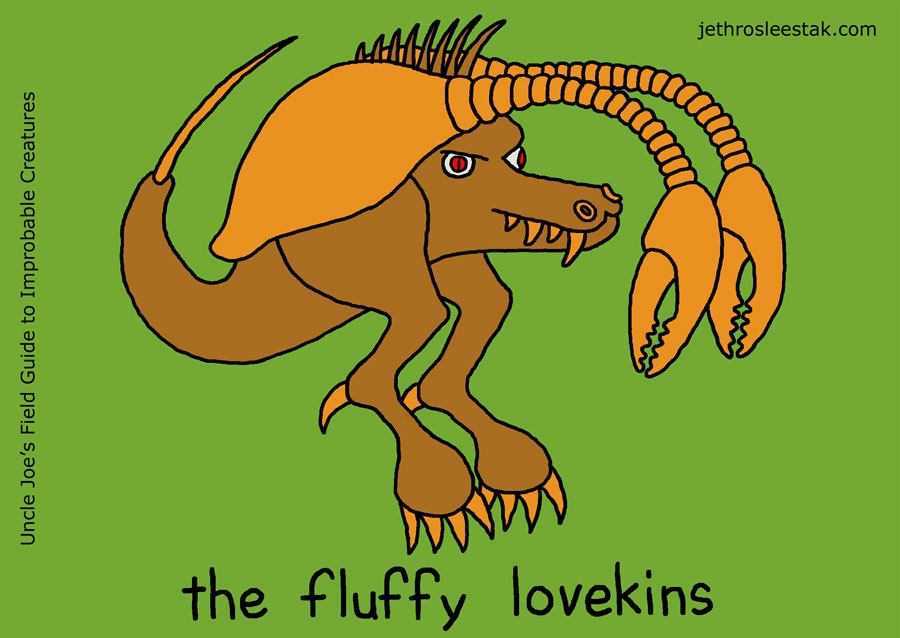 Fluffy Lovekins is the ironic name for the Eye-Stabbing Murderbeast, which is a training organism used by the US Marine Corps’s elite GMO Response Unit.

The original Fluffly Lovekins was a child-sized animatronic teddy bear with pink fur and an annoying-as-hell cutesy voice that gave adults migraine headaches. This teddy bear was the most popular toy of the 2037 Christmas season, and Amazon-Walmart shipped over 10 million units in North America alone.

Unfortunately, there was a computer error at the Nashville distribution center, and the shipping cartons for almost four thousand of these toys contained an Eye-Stabbing Murderbeast instead of an animatronic bear.

The incident became the inspiration for so many horror movies, video games, action films, clothing lines, youth cults, marketing campaigns, accessories, etc., that it accounted for 1% jump in GDP for at least a decade. Conspiracy theorists accused the government of creating the incident on purpose.

The Marine Corps marching cadence “Fluffy Lovekins” has the same rhythm as the jingle in the toy commercial, which was sung by the bear in its make-you-puke cutesy voice.

Fluffy Lovekins, I adore.
Mommy, buy this at the store.

Sleepy little pumpkin pie,
without her purchase, I will cry.

Fluffy Lovekins, don’t forget.
Put me on your Christmas list.

Fluffy Lovekins, fuck that whore.
Body parts all on the floor.

Fluffy Lovekins rips your shit.
With grenades, you cannot miss.

The Eye-Stabbing Murderbeast was originally designed in Germany to be a house pet for Sadomasochists, but the creature was found to be too effective at outright killing to be used for the intended market. Thankfully, military spending was there to fix things, like it does for all of life’s many problems.