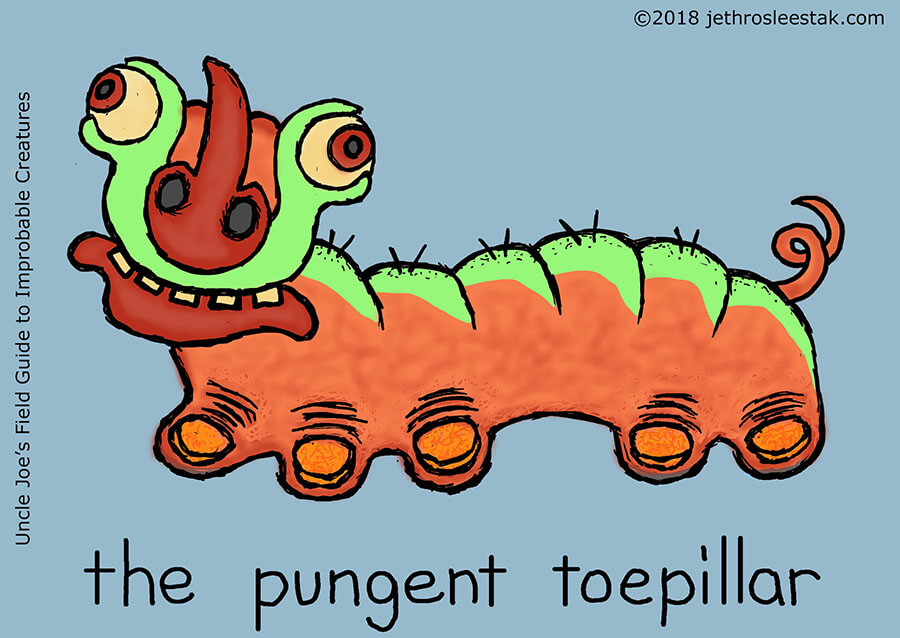 The Pungent Toepillar is truly gross: its genome engineer combined pig fetal cells with DNA from fat green hornworm caterpillars to make a hairless warm-blooded monstrosity that grows up to 4 feet in length. The animal has an odor like sharp cheese that emanates from waxy patches on each foot. These cheesy patches resemble large toenails. That’s why the creature is sometimes called the “Toecheese Worm.”

Who originally created this unlicensed GMO remains a mystery, but snack food fans are eternally grateful. Thanks to the Toepiller’s waxy secretions, the corn-chip industry has found a low-cost source of artificial nacho cheese flavoring that has cut the price of horrible breath in half.

The Toepiller’s waxy patches of toe cheese grow incredibly fast and must be harvested daily for optimal yield, but allowing the toe cheese to build up longer before removal alters its flavor in interesting ways.

According to legend, ranch-flavored nacho cheese chips were invented after a strike by workers at a plant in Fort Worth, Texas left toepillar cheese “on the hoof” so to speak where it sweltered in the August heat for a week.

Imagine a magical world built by Willy Wonka but for snack chips and trail mixes and that sort of thing. It’s not like that. Instead, there are giant stainless-steel vats and conveyor belts and large rumbling machines. Yes, there are Oompa Loompas that work there, but they are all chasing Toepillars with cattle prods and cursing and not singing any songs about spoiled brats.