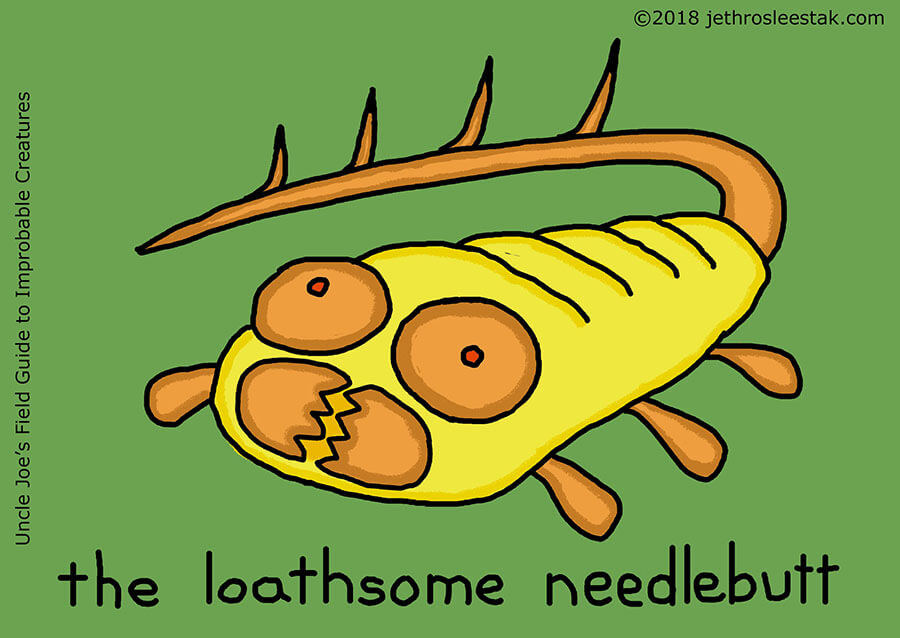 The Loathsome Needlebutt (or Ouchtoe as it is sometimes called) was the first thing Captain Cook stepped on in the year 1770 when he made landfall in Australia and discovered that the little fucker’s barb was capable of sticking through boot leather.

Like nearly every other animal in Australia, the Needlebutt has a powerful venom and no shortage of drunks ready to stumble upon it.

Needlebutt venom is hallucinogenic and extremely unpleasant. It effects have been described by many as making your body feel like it were melting into vomit, possibly because vomiting is what the victims spend most of their time doing.

Others say it is like being sauteed in rancid garbage or smelling every gross smell you had ever smelled all at once. That is why Needlebutt venom is used in micro doses to desensitize international tourists before traveling to the French Quarter in New Orleans during the summer months.

The barbs on a Needlebutt’s stinger make it impossible to remove from human skin without cutting.  It cannot be pulled out without breaking, it continues to secrete venom until removed, and it feels like a burning hot poker buried in the skin. While all this is happening, the victim is hallucinating a in bad way and panicking.

Due to his encounter with the Needlebutt, Captain Cook is supposed to have said when he sailed away from his first landfall in Australia, “Fuck this fucking place. I mean I would feel honored to call in the goddamn airstrike. Napalm all this shit and burn it the fuck down. Fuck my mother on a Pogo stick. Shit that hurts.”

For a brief while, this quote was used as the motto on the great seal of colonial Australia before being changed to “Always fresh in the Outback,” which was then replaced with “No rules, just right.”