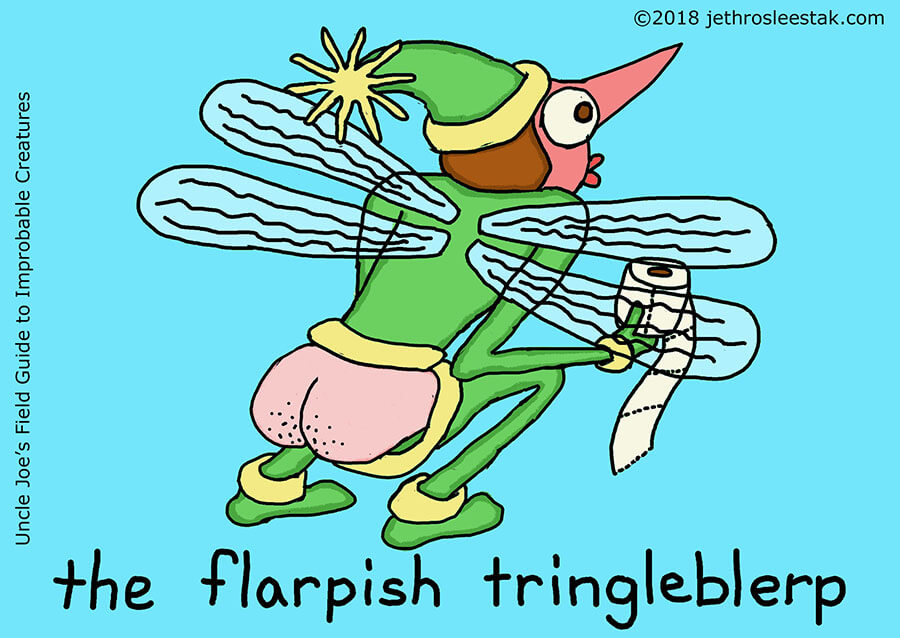 The Flarpish Tringleblerp were the smallest, most teeniest of all the Irish  fairies. They crapped in people’s shoes at night and used their credit cards to buy stuff online. That was how they got even with mortals who failed to show them proper respect or sometimes just to be a dick.

Although the Tringleblerp were vanishingly small (or flarpish), they were the power shitters of the fairy kingdom, capable of laying atrocious gorilla turds in people’s boots and wooden clogs if they got pissed at them.

That is why the priests of Ireland encouraged their congregations to hide their shoes in the microwave or refrigerator at night, and that is why leftover cabbage smells so bad the next day.

To avoid provoking the wrath of the Tringleblerp, the Irish will sometimes pee in a bush right outside your door and do other inexplicable things. They don’t mean to be rude. It’s a matter of holding true to ancient traditions.

As the illuminated inscription of the famous Book of Kells from about the year 800 reads:

“You try drawing all these wee critters in the letters and such all day long. It makes you see stuff to try to do it without a drink or two to start the day off right. Fock the abbot and his rules. And you’d pee in a bush too if the Flarpish Tringleblerp were after you, and so fock you too.”

The Flarpish Tringleblerp decided this world wasn’t worth shitting on anymore when Donald Trump got elected, and so they left the mortal sphere and went back to the fairy lands.