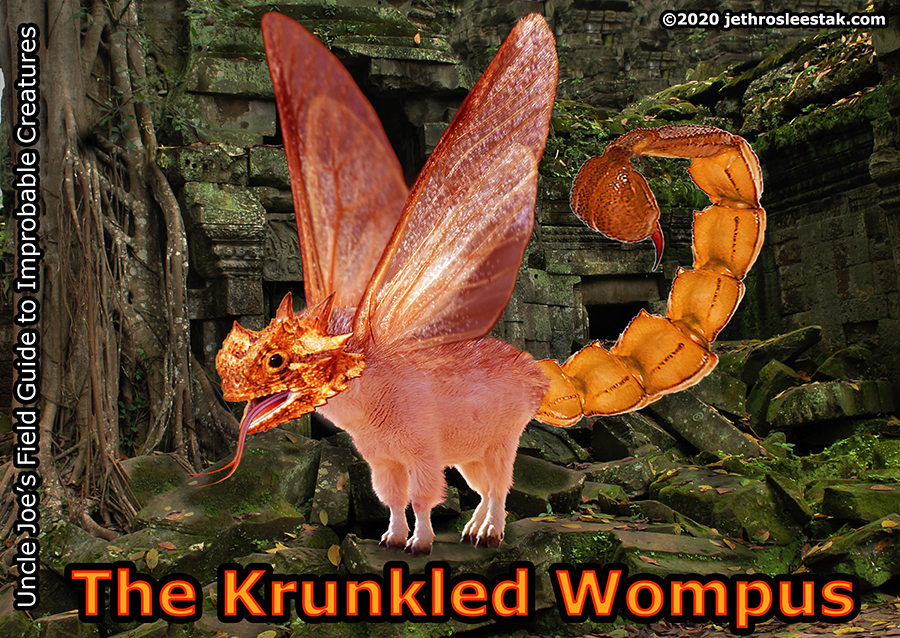 The Krunkled Wompus is one of the many types of hell beasts that wait to feast on the souls of the damned. It uses the stinger on the end of its tail to stab victims in the eye socket and pump their skull full of corrosive venom. Then it bites off their face and sodomizes what is left of the corpse before eating that as well.

The Wompus was introduced by Satan to help cope with the overflow in hell following the 2016 US Presidential election.

“Previously over 60% of the human population passed through Purgatory before final booking, but with so many people willing to support such a selfish, lying, cheating, mean-spirited bully, it became impossible to give them the benefit of the doubt.

“And so here we are trying to cope with an avalanche of spiritually-diseased trash that we didn’t ask for, and we don’t even have room for all their damned MAGA hats. Hopefully the Bottomless Pit of Stupidity version 2.0 and the new Krunkled Wompus can help us eliminate some of the excess.”

The Krunkled Wompus isn’t actually krunkled. “Krunkle” is a reference to the sound of breaking bones when the Wompus tramples newbies who make the mistake of saying stupid shit like “I’m offended” or “I’m not racist, but [some stupid racist shit]” during orientation.

The orientation sessions conducted by hell’s HR Department for new arrivals are held in a giant Wompus corral for this reason.

The Wompus was developed for Satan by Facebook in collaboration with the Chinese government.

Of course Satan had to dial the Wompus down a couple of notches to feel comfortable about using it, but Facebook engineers were there to help him all the way through implementation.

The lower reaches of hell, certain parts of New Jersey.