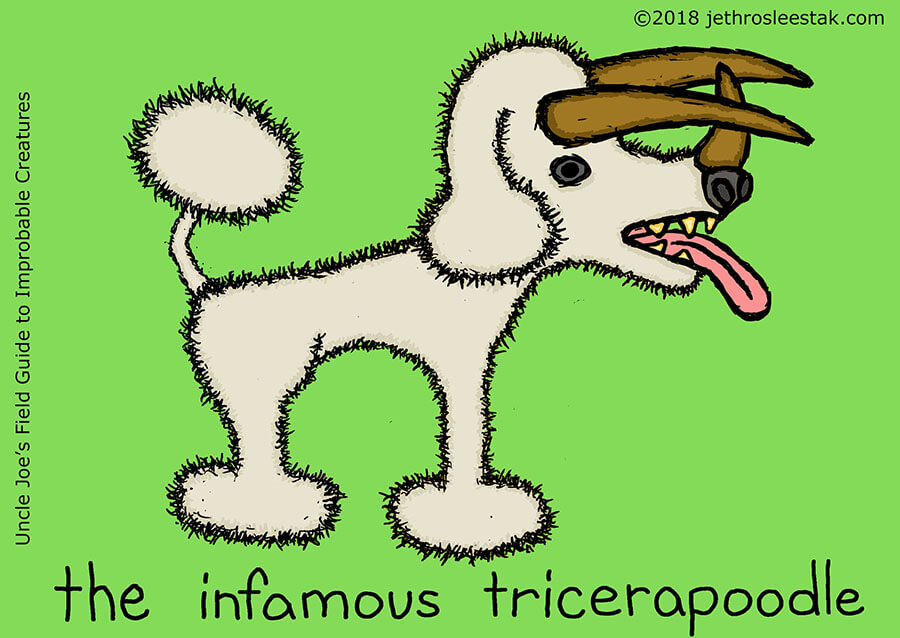 The Infamous Tricerapoodle inhabited France during the Cretaceous Period. Supposedly.

Let’s just say that not everyone accepted Dr. LeFloop and his questionable fossils, some of which were clearly made from paper mache and plaster while others were parts of marble sculptures of varying degree of antiquity.

Nevertheless, the debate in France over the authenticity of the “fossils” raged for decades, fueled by chauvinistic nationalism and attachment to the poodle as a symbol.

Of all the many fist fights between members of France’s prestigious Academy, the only one to involve more than 12 persons was the melee that occurred during the debate over the Infamous Tricerapoodle.

That brawl might not have been the first fight on the floor of the assembly in which folding metal chairs were used as weapons, but it was the first to be televised.

The broadcast of the 1972 melee in the assembly of the French Academy was of profound cultural significance, and it influenced art and entertainment  around the world, most notably in the United States, where it inspired the pro-wrestling renaissance.

And so when you watch clips of old wrestling matches, and you see some some “Iron Sheik” racial stereotype hit some “Dr. Voodoo” racial stereotype in the back of the head with a folding metal chair, you can thank the Immortals of the French Academy.

It’s just one more example where the U.S. would be a more genteel and enlightened place if it weren’t for the influence of the French.

Before bringing his Infamous Tricerapoodle fossils to France, Dr. Lefloop offered to sell American showman P.T. Barnum a brick he claimed to be from the Tower of Babel, a stick from George Washington’s father’s very own cherry tree, and Moses’s sandals.

Dr. Lefloop was paid $25 for the lot, and each artifact turned out to be a hit in Barnum’s show.

Photographs of these artifacts are now used as illustrations in Creation Science textbooks for home-schooled children.

Supposedly in France, supposedly at a time when France was submerged in sea water.

As for Dr. LeFloop’s homemade fossils, which were probably the only Tricerapoodle that ever existed, they were destroyed by a terrorist bomb in the Paris Metro.

But their stain on the national character of France is indelible. As Jean Paul Sartre wrote, “Le Tricerapoodle, c’est moi.”