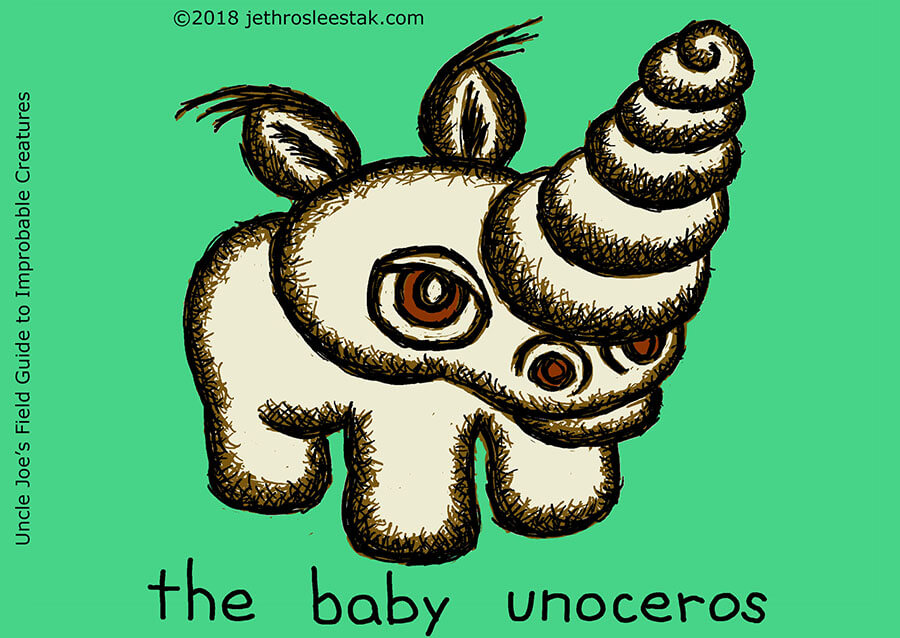 Of all the mythic beasts sought after by wizards, the Baby Unoceros tops the list, and the reason is simple: Baby Unoceros snot is used in every magic spell imaginable. It’s like the high-fructose corn syrup of magical ingredients.

Want to remove a wart? You will need six frog scrotums and some Baby Unoceros snot.

Want your boss to start growing hair on his palms? The lips of a flatulent porcupine and Baby Unoceros snot.

Want Donald Trump to fall down the steps of Air Force One and break his fool’s neck before he can destroy more institutions and lives? The queef of a mermaid, three fairy farts, and more Baby Unoceros snot.

Sadly, the Baby Unoceros is more rare than either mermaids or fairies.

That’s why Baby Unoceros is more precious than the eggs of the phoenix bird or even the dandruff of the sphinx.

According to the Apocrypha, the first Baby Unoceros was born not long after Noah’s ark landed on Mount Ararat. In an email sent by Noah’s son Shem, an email that is clearly CYA in nature, he writes:

“It seems there may have been some overcrowding on the herbivore deck, and no one saw the harm in mixing different types of animals in the same pen, at least at the time…there are some SKUs that are incorrectly assigned in the database…developer says data QA not his job.”

Since then, additional Baby Unoceros have been born, but only on rare occasions every century or so when a lady unicorn’s man would be on lockdown in some sorceress’s dungeon or out drinking with the centaurs, and she would start craving the satisfaction that only a rhinoceros can provide, and things would get all freaky and good for a while.

Of course, all the many times a stallion comes down with rhino fever don’t really count because that union produces Rhinocorns, which are completely different. Rhinocorn snot is used to make artificial soft-serve ice cream and milkshakes for the fast-food industry.

Wherever unicorns go to commit sins against a God and nature (according to the guy with the sign in the parking lot). Dragoncon and other venues.