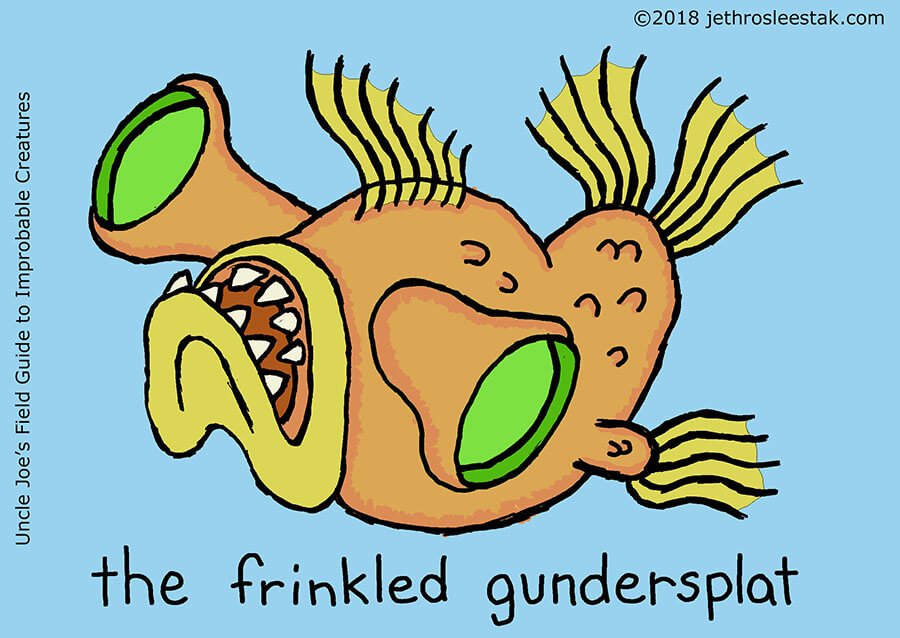 The Frinkled Gundersplat is the cornerstone of Lithuanian cuisine, and they add the tiny fish to everything they eat and drink. You can’t even order a glass of orange juice in Vilnius without it containing something from a Gundersplat, either dried fish meal or its tiny iridescent scales (frinkle) or maybe even its head as a garnish.

Needless to say, traditional Lithuanian dishes such as microwavable pizza rolls and frozen pot pies are loaded with it.

The poet Wordsworth compared the Gundersplat’s flavor to “the vomitous juices at the bottom of a sun-baked dumpster,” but Lithuanians cannot fathom other people’s extreme dislike for the fish. They add it to sweet and savory foods alike, including such unlikely things as lime sherbet and breath mints.

Over the centuries, whenever the Swedes or Poles or Russians would invade the country, which happened all the time, Lithuanian patriots would throw the carcasses of rotten Gundersplats at the enemy, and these would explode on impact, showering the target with the fish’s liquified entrails. Then the unlucky soldier would be shot while he was puking his guts out.

The English word “splat” is derived from this practice of gundersplatting an enemy to distract him.

Actually, all the sound-effect words from the old Batman television series are Lithuanian in origin: biff, zlonk, kapow, etc., but these words are sexual in nature and not discussed here other than to say that if you haven’t had a good zlonk, then you don’t know what you are missing.

The Baltic Sea, the North Sea, portions of the North Atlantic.