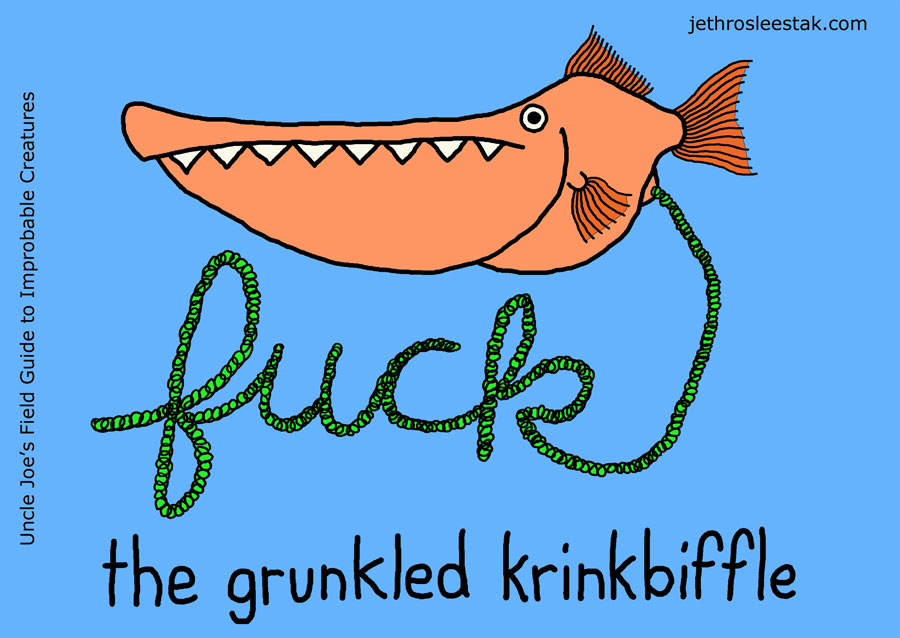 The Grunkled Krinkbiffle eats floating plastic garbage on the surface of the world’s oceans and excretes this waste as a continuous string of bio-luminescent neon-green feces, which it uses to write curse words in script letters. The problem is that the Krinkbiffle’s glowing curse words wash up on beaches and offend Republicans, and that is why they want the creature exterminated.

Since the Krinkbiffle was genetically engineered to save the oceans from choking to death on our garbage, there are some who say that the creature’s vital ecological function is more important than whether or not its poop words are offensive, but all of these people are godless America-hating liberals.

Thankfully, right-wing super PACs have sponsored a massive amount of advertising to offset all the biased reporting in the liberal media. The super PAC ads explain how floating plastic garbage is actually beneficial to the oceans and how we need to offer subsidies to the oil companies to produce more of it until the menace of the Krinkbiffle has been dealt with.

A single Grunkled Krinkbiffle can eat over seven metric tons of floating plastic debris in a month. It is estimated that the number of words a Krinkbiffle execretes in a lifetime is the equivalent of seven Bibles, although the Bible does not contain words like “cocksucker” and “shitfuck” (except in the parts where Jesus goes off on the Pharisees and Moses’s trip to Vegas).