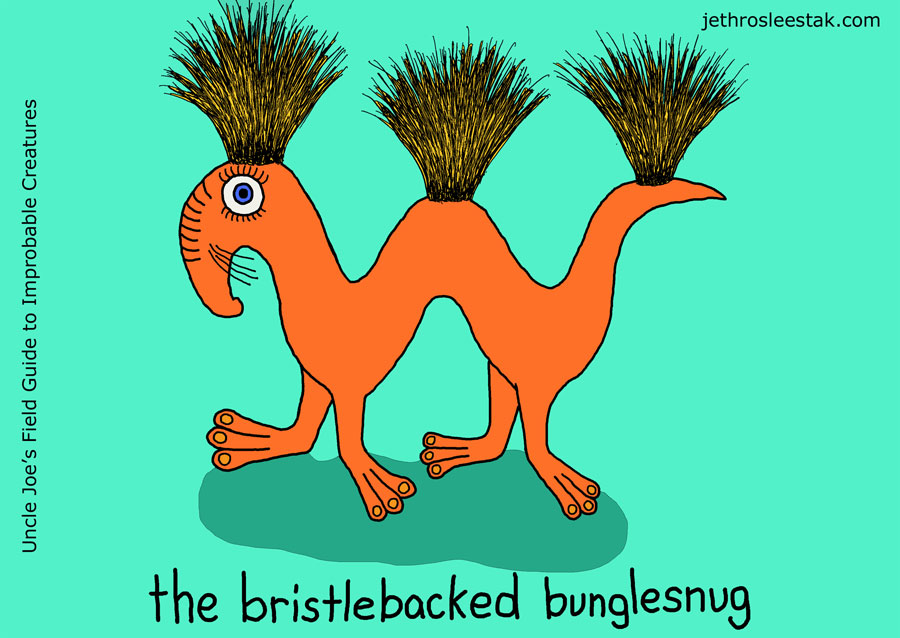 The Bristlebacked Bunglesnug’s tufts were once used to make brushes for shoe polish, and this adorable creature was almost hunted to extinction because of it. Thankfully Queen Victoria made a patriotic appeal to save the Bunglesnug, and Britons began polishing their shoes with little fluffy kittens. Live of course, and reusable. (London’s dingy gray exteriors were once incorrectly blamed on soot from coal fires, but now we know that a least 80% of the patina of the Victorian era came from all the cats rubbing on everything and spreading shoe polish all over the place.)

The Bunglesnug can be much more than a nuisance on commercial dairy farms, and economic losses are currently estimated by the World Bank to be around two billion dollars annually.

In the wild, the Bunglesnug follows herds of animals and steals milk from lactating mothers as they walk. Since it is not easy for the Bunglesnug to keep up with the longer legs of the herd on the open range, there is never a problem with overfeeding, but in confined pens and milking stalls, the situation is completely different. The Bristlebacked Bunglesnug has been known to go to town on them titties and get some kinda swole up on that milk, as my father would say.

Man, check this out. According to ancient folklore, the Bunglesnug uses its bristles to tickle the noses of sleeping cows and make them sneeze. That doesn’t really happen in real life, but people believed that kind of thing back in the olden times. People were stupid back then because they didn’t get enough electrolytes, but whatever.

They also believed that a Bunglesnug would swim straight up a whale’s butt hole, and that’s how it got its name. It’s in “Moby Dick” I think. Starbucks or one of those dudes throws a hatchet at one and kills it and has to wear it around his neck for the rest of the book. Fuck, I don’t know. I was high a lot that semester.