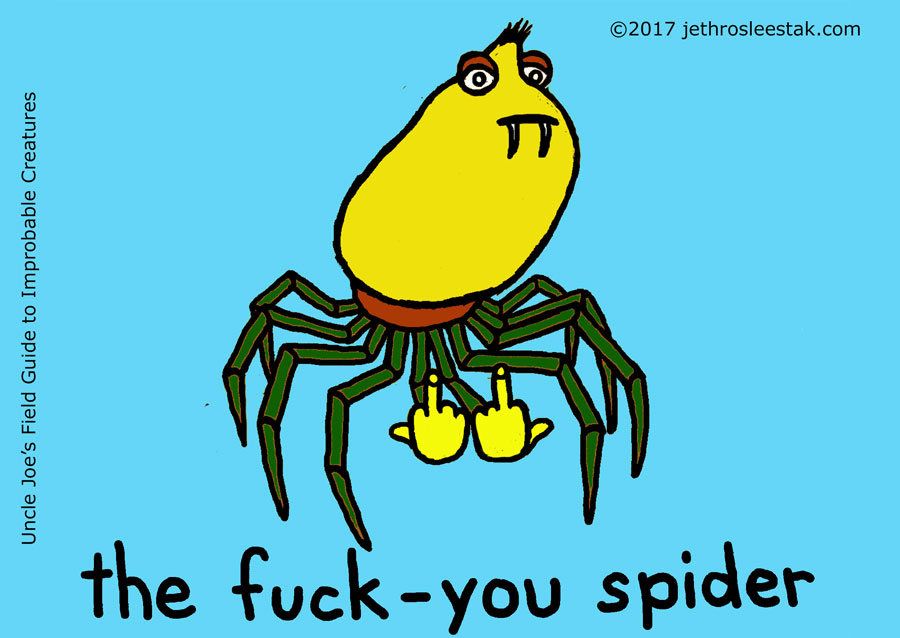 Forget enchanted harps and leprechauns and fairies; the Fuck-You Spider is the central figure of Irish mythology.

There are at least forty different stories in which Irish hero Finn McCool uses a Fuck-You Spider to trick a giant or fuck some seal or catch the queen of the bog or something like that, and an enchanted harp isn’t in any of them. Put it this way, for every story about a harp, there are at least ten about the Fuck-You Spider, usually involving a milkmaid’s underpants or somebody’s pecker or that sort of thing.

That is why the Fuck-You Spider is included so frequently in the marginalia of illuminated Bibles produced in Irish monasteries. Look closely at the Book of Kells if you don’t believe this.

The Irish writer Oscar Wilde always kept a Fuck-You Spider or two in a golden snuff box in his pocket, and he would secretly release them into the hair and clothing of people he found annoying. Ecologists believe that Wilde was instrumental in establishing populations of the creature in Paris, London, and the eastern seaboard of the United States.