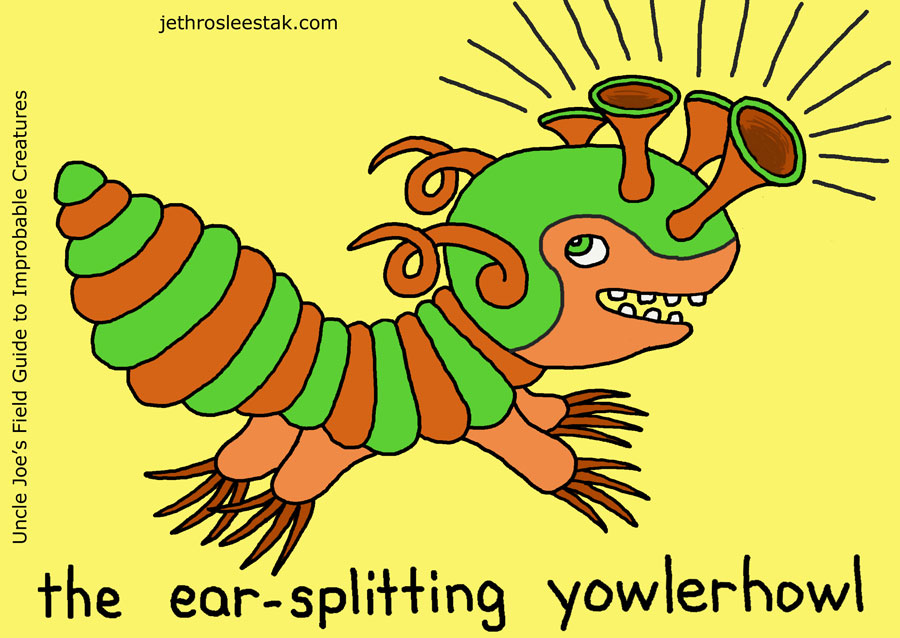 The Ear-Splitting Yowlerhowl was genetically engineered for the Australian sporting and novelty markets, where it was briefly sold under the brand name Scrumblebum before being recalled due to product liability concerns.

The Yowlerhowl goes dormant when confined in dark containers, but when released into daylight, it springs to life and starts streaking around and howling like a siren and scratching the hell out of everything as it runs. To this day, insurance policies in Australia specifically exclude damage resulting from incidents with Yowlerhowl.

Imagine a bunch of drunken Australians swinging boots and cricket bats through walls, windows, and furniture, and you will have a good idea how much damage can result from a single Yowlerhowl leaping out of an unwrapped gag gift.

The creature’s unique accordion tail acts as a bellows for the acoustical horns on the forehead. The ducts connecting these four horns are completely separate form the Yowlerhowl’s respiratory system, and thus it can emit a siren-like wail exceeding the human threshold of pain for hours on end. The Yowlerhowl is incredibly fast and difficult to capture or kill, and so a single individual can cause a building to be evacuated.

Releasing a Yowlerhowl inside a public building or into a crowded outdoor venue is a felony crime in the US.

The Black Friday Massacre is thought to have been triggered by the release of multiple Yowlerhowls inside the Phoenix area Walmart. It is difficult to say for sure because the resulting riot and fire destroyed most physical evidence, and survivors were unable to distinguish the howl of a Yowlerhowl from a recording of the building’s fire alarm when tested.

The claim that the Black Friday Massacre started with a fist fight over the last Fluffy Lovekins animatronic teddy bear on the shelf has largely been discounted as a myth created by newstainment programs to milk the last of the story’s ratings as a headline.

None living in the wild. Bred only for recreation, research, and acts of terrorism.