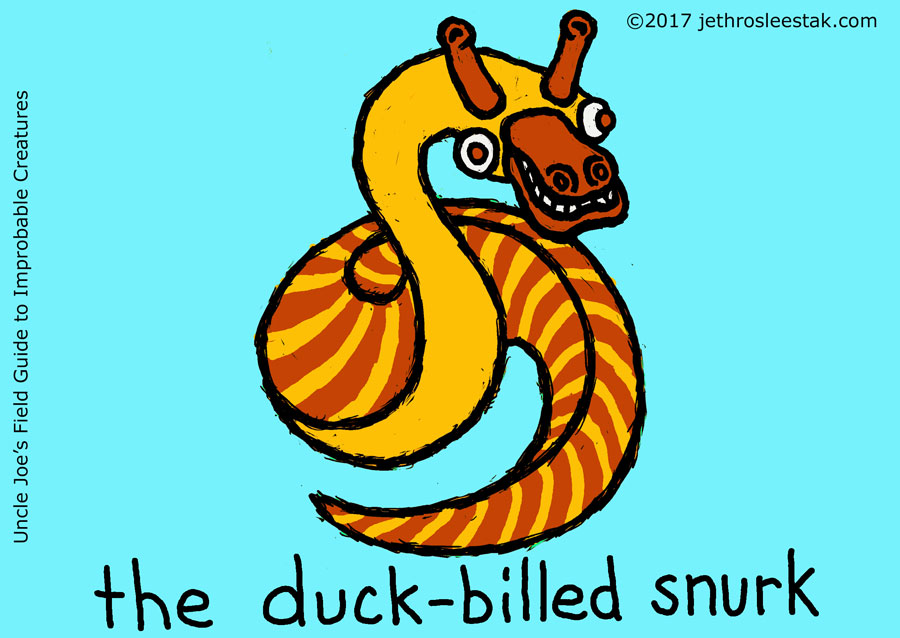 The Duck-Billed Snurk is slimy like a slug yet lightning fast like a snake. The Snurk’s venom is only mildly toxic, but instead of having two fangs, the creature has a mouth full of needle-like teeth, and it isn’t shy about using them if you try to grab it. Luckily, the creature doesn’t get much bigger than a chipmunk.

Snurks were previously unknown until construction of a new dunking stool complex for the Bible Heritage America amusement park in Ainis, Texas exposed the underground chambers in which these odd creatures had dwelt undisturbed for millenia.

The Snurk are biochemically different from all other life on earth and are believed to be intestinal parasites left by a mining or prospecting expedition from another world, one that visited the earth forty thousand years ago. Artifacts unearthed at the Bible Heritage America site include what appear to be discarded mining tools built for alien “hands,” alien food packaging, and complex implements made from a combination of terrestrial materials and extraterrestrial components.

Scientists who have personally worked with the Snurk are convinced that it is an intestinal parasite of some sort because the first thing it does upon accidental release is try to go straight up a person’s anus, shooting up a pant leg if left open or unguarded. For that reason, Snurkologists keep the bottoms of their pants legs taped up with duct tape. They tried elastic bands at first, but it wasn’t secure enough. A Snurk gone get that booty if he smell it, as they say.

The lower intestines of unsuspecting visitors to Bible Heritage America’s World of Family Fun and Praise. (Don’t go on the water slide whatever you do.)