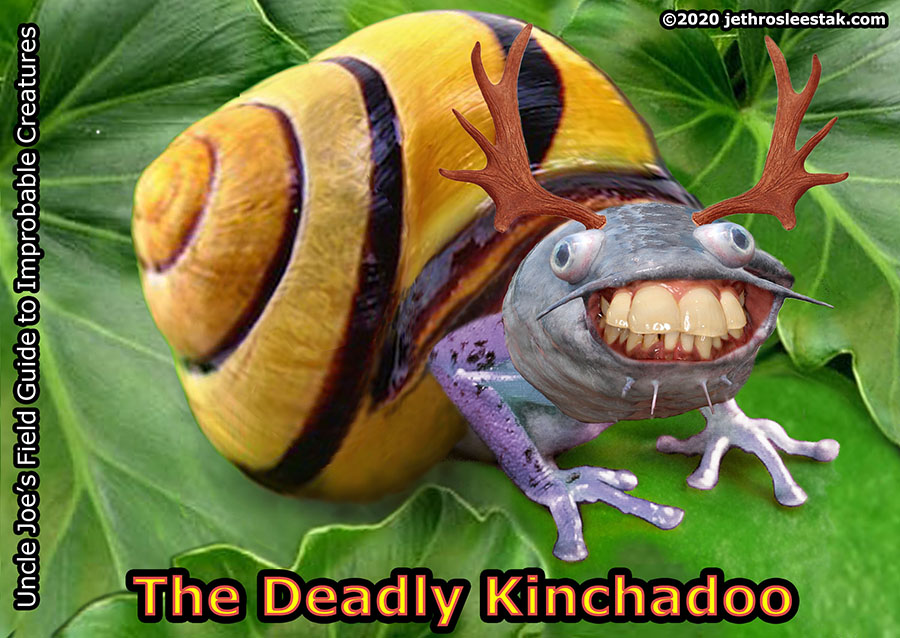 The Deadly Kinchadoo or Biting Snail isn’t actually a snail, or a kinchadoo, whatever the fuck that is. It’s more of a frog-moose hybrid, with just enough snail genome spliced in to provide the shell and extra mucous.

The Kinchadoo is venomous, but it has no fangs. The venom is in the creature’s saliva, and it must latch onto victims and chew to administer enough to have an effect on an animal of any size. Consequently, human fatalities are quite rare and usually involve someone passing out drunk on the lawn.

The Kinchadoo is attracted to dad jokes and cheap cologne but is repelled by rancid luncheon meat. That is why Dutch children tie expired balogna around their dads’ ankles on Fathers Day and celebrate by smashing bottles of Old Spice in the street.

In traditional Chinese medicine, the powder made from dried Kinchadoo anuses is used to cure erectile dysfunction, blindness, and Mormonism.

For these purposes, dried Kinchadoo anuses are held to be far more potent than rhinoceros foreskins or mongoose spleens or any of that other weird shit from endangered animals they pay all that money for.

[Do you know why it isn’t racially insensitive to point out this highly dysfunctional aspect of traditional Chinese culture? Because if one of the many repulsive things about stupid white redneck culture was consuming large volumes of endangered animals, you would be right to point it out. As Gandhi said, “Don’t be racist. Hate all stupid selfish assholes equally.”]

Lawns with dandelions and weeds. Why do you think boomer dads are so into mowing and spraying weedkiller? If you are going to bathe in English Leather, drink a six pack, and tell pun jokes, you have to take some precautions.