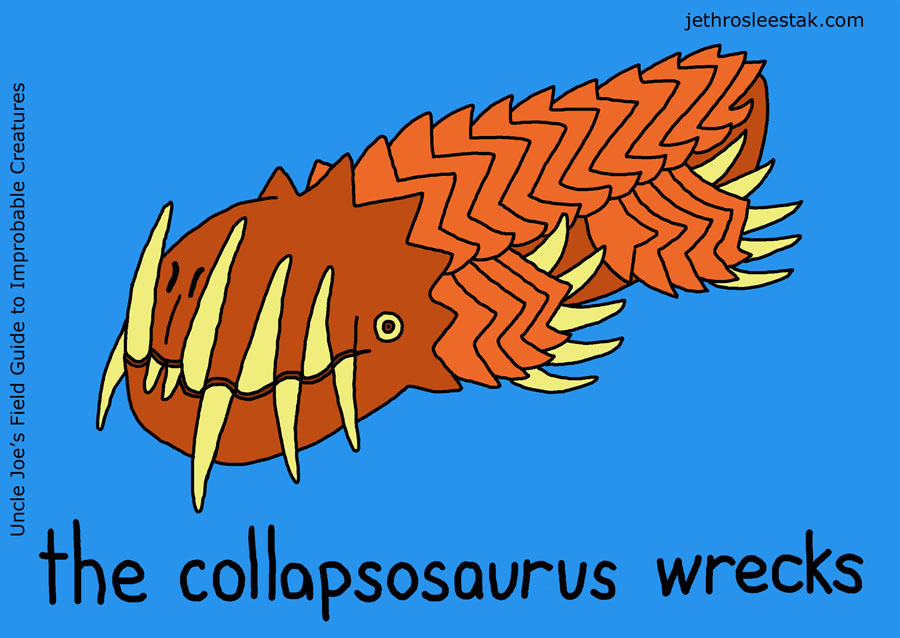 Collapsosaurus Wrecks is a therapod dinosaur no larger than a guinea pig, but this small creature caused the end of civilization in a literal sense, at least the end of permanent architecture and cities as they had existed for thousands of years.

The Collapsosaurus burrows through solid granite at an average rate of 9 meters per day, turning otherwise stable bedrock into useless rubble that cannot be built upon safely. That is why all twenty-second-century architecture is mobile homes mounted on skids, and skyscrapers and city skylines are as legendary as the lost continent of Atlantis.

Scientists theorize that the Collapsosaurus was originally from the lower depths of the Earth’s crust, but explosive charges used in petroleum fracking somehow removed natural barriers or disturbed subterranean ecosystems, resulting in the creature colonizing rock layers closer to the surface where they could reproduce much more rapidly and turn everything into Swiss cheese by their endless tunnelling.

Ironically, the effects of Collapsosaurus burrows are identical to those of petroleum fracking: destabilized bedrock, contaminated groundwater, underground methane explosions, ruined mineral resources, sink holes, and earthquakes. In the words of that great Noble Laureate Dr. Justin Bieber Jr., “It is as if we in our arrogance called the Collapsosaurus to the surface to complete the destruction we had started with our dynamite.”

American Republicans still maintain that the twelve plus years of low gas prices made it all completely worth it and that liberal elites should learn to live in double-wides just like everybody else.

The discovery of C. Wrecks was simultaneously the most exciting living fossil ever discovered (a dinosaur!) and the most frightening ecological disaster of the 2050s, which is saying quite a bit. To put it in context, in 2051 the digital genetic splicer was invented, and by the end of the decade, models featuring rapid-cloning-technology were as common in homes as microwave ovens.

Every week there was some new plague of biblical proportion announced on the news: chickens with the lips and ass of some sex-tape media whore, the entire cast of the “Taxi” television sit-com as guinea pigs, including Danny DaVito and Andy Kaufman, leeches with faces of politicians and televangelists. Needless to say, retail cloning of deceased celebrities via downloadable sequences did not help with the problems caused by these new home appliances.

By 2060, lazy parents trying to come up with last-minute science projects for their kids would just choose something, usually a favorite animal or the kid’s pet spliced with a celebrity from some nostalgia series with a thesis that was really dumb: “Can Ross Get Back With Rachel If They Are Chinchillas?” “Could A Muskrat Potsy Be More Cool Than a Muskrat Fonzy?” “What Does Jerry Falwell Bacon Taste Like?”