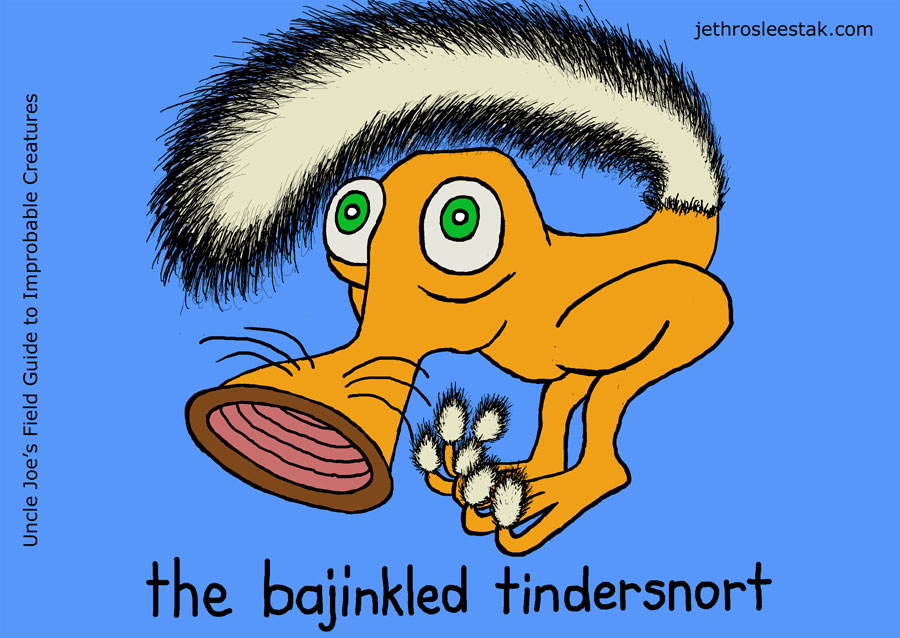 According to American humorist Mark Twain, the Bajinkled Tindersnort is nature’s answer to the age-old question: “What if a plucked owl had sex with an alley cat inside a shop vac?”

The Tindersnort’s tube-like lips are capable of creating a strong suction, which it uses to vacuum up its prey (teddy bear hamsters and other cute small furry things that make you hate the Tindersnort).

The fluffy poofs at the tips of the Tindersnort’s upturned toes and at the end of its tail are called “bajinkles.” The Tindersnort holds its bajinkled tail bent forward over its head as it walks, which trembles with each step like a feather parasol and makes the creature look like a silly stuffed animal come to life instead of like the merciless predator that it is.

But the Bajinkled Tindersnort is in fact incredibly affectionate. No matter how many small furry things it has killed in a day, the Tindersnort will still want to come onto the bed and snuggle with its people, and it never fails to magically appear in the lap of anyone who sits down, squirming and chirpling to be rubbed.

The Tindersnort’s “chirple” is a purr like that of a cat but with more of a chirping sound and slightly louder. A Tindersnort’s chirple is always accompanied by affectionate rubbing of the face and body and the kneading of feet, which eventually degenerates into a drooling make-out session that leaves your clothes covered in bajinkle.

The “tinder” in Tindersnort derives from the fact that the bajinkle of the creature’s tail makes an excellent tinder for starting fires, even in very cold and damp conditions. In his failed-yet-heroic expedition to the South Pole, the explorer Shackleton brought over 800 pounds of bajinkle with him. Only 25 pounds of Shackelton’s bajinkle was in the form of loose fluff, the rest being sewn into the lining of undergarments. (Since it is too cold to bathe in Antarctica, it only made sense for Shackleton and his men to wear underpants meant to be burned.) Survivors of the expedition said the smell of the cooking fires killed all appetite and made it easy to stick to their strict rations.

The homes of people who can tolerate living with serial killers as long as they have poofy tails.