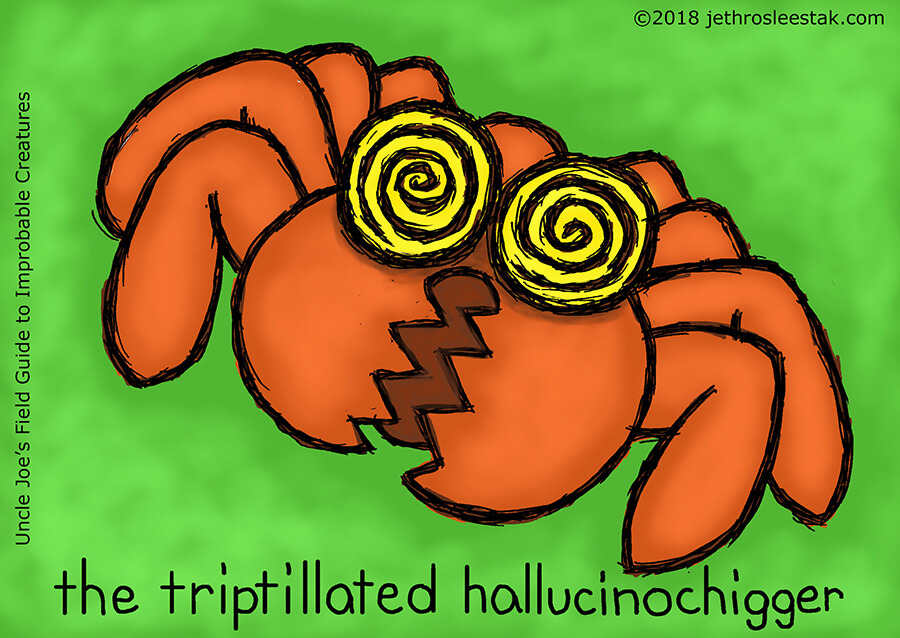 People are aware of the horrible diseases that they can catch from mites and ticks, but have they ever thought about all the chemicals and crap that these poor arachnids are exposed to by feeding on humans?

Most people encounter the tiny mites called chiggers while camping out at hippy-shake music festivals in the summertime. Considering how much acid, molly, shrooms, and really good THC people have in their bloodstreams at these events, it’s only natural that parasites would have to adapt to these chemicals in order to survive on the humans they encountered.

And that is why evolution produced creatures like the Freak-Out Mosquito and the Triptillated Hallucinochigger.

Instead of fleeing in terror at the first smell of marijuana like the Freak-Out Mosquito, the Triptillated Hallucinochigger is an example of nature employing a strategy along the lines of “if you can’t beat them, join them.”

To avoid having its motor skills and sensory processing compromised the first time it feeds on a hallucinating host, the Hallucinochigger secrets its own psychoactive cocktail in massive quantities and spends its entire life cycle tripping its balls off. Scientists describe such a perpetually tripping creature as being triptillated or frenchedy fried.

The good news is that you no longer have to bring your own drugs to summertime concerts. All you have to do is stroll through the weeds or sit down on the high grass and wait for the red bugs to do their thing.

Highest concentrations of these mites are found at so-called “origin sites,” meaning the fields used for large outdoor music festivals, with expanding populations in adjacent fields and farms.