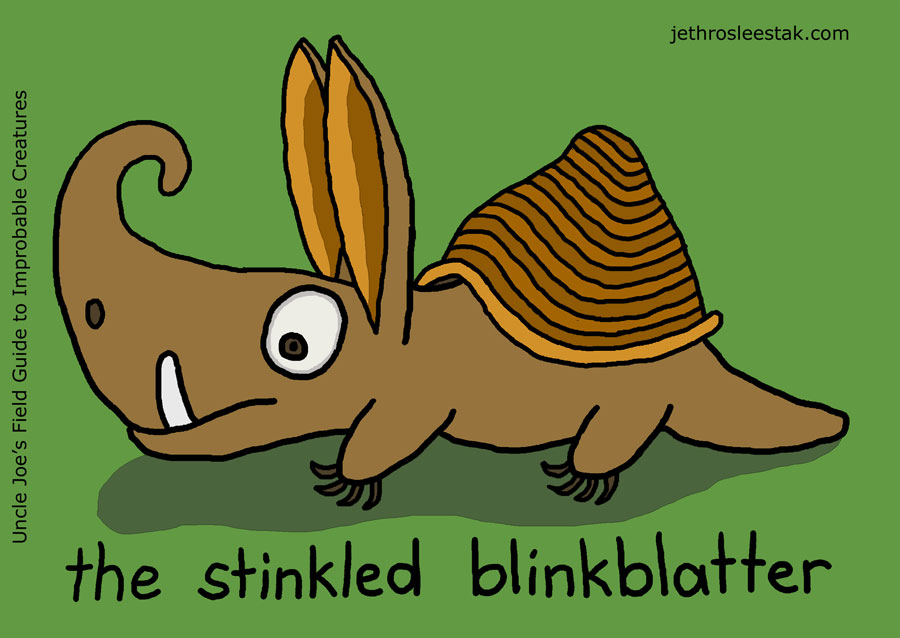 Originally thought to be a relative of the armadillo, The Stinkled Blinkblatter is in fact living proof that the kangaroo can successfully copulate with a turtle. The creature runs low to the ground like an overgrown iguana, but it is capable of leaping surprisingly high, up to 1 meter off the ground. The Blinkblatter uses its hooked nose or “stinkle” to jump up and hook onto people’s pants and pull them down. Scientists don’t know why the creature does this, but that is why you see so many drunken Australians walking about with their pants down around their ankles in places like Bali.

The Blinkblatter is supposedly named for the sound of its shrill cry, which sounds nothing like “blinkblatter,” but you have to keep in mind that it was named by Australians.

There is nothing Australians love better than to barbecue a nice Blinkblatter to celebrate Her Majesty the Queen’s Birthday. Here is the most popular recipe as voted by the readers of The Sydney Morning Herald:

Take one Blinkblatter, either scraped with a spatula from the roadway or shot fair dinkum with a gun, and use the garden hose to wash away loose gravel so your grammy doesn’t crack her choppers.

Next, pull out the innards taking care not to rupture the musk glands at the back end, else you’ve got a lot more work to do with the hose. Then cram the beast chockers with spices, garlic, sausages, pineapple, potatoes, carrots, minced pork or beef or whatever else you got.

Rub it down with salt and oil and lay it out on a bed of coals for at least an hour, but take care not to drink too much while you are waiting and pass out and burn it all to hell.

Leave the head on as it makes a good centerpiece for the table. Also, the ankle biters can gnaw on the ears once they get all nice and crispy. God save the queen!

Semi-rural and urban scrub lands with access to rubbish piles where the Blinkblatter lays its eggs. Invasive in New Guinea, Malaysia, Indonesia, and numerous archipelagos.