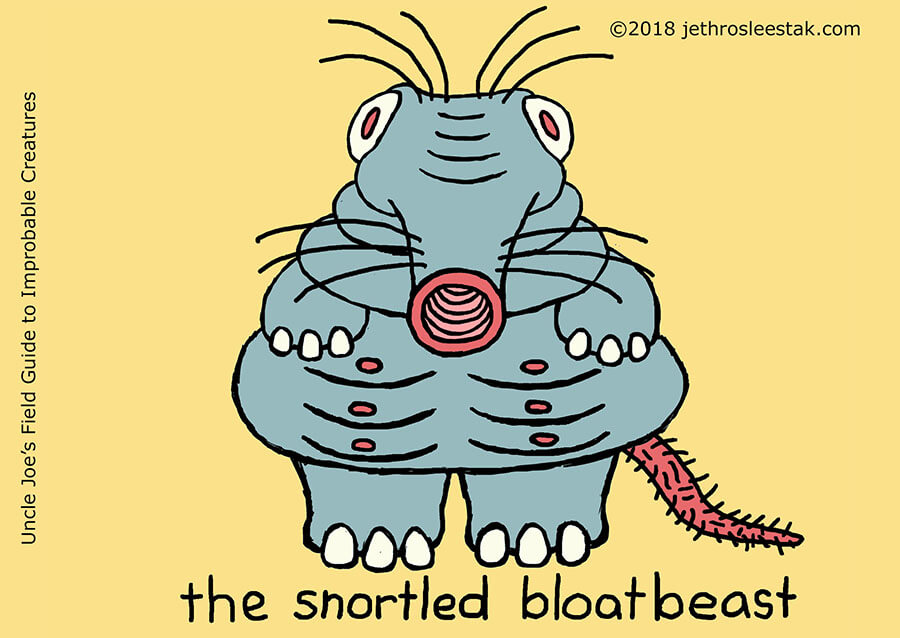 The Snortled Bloatbeast has a neck that is telescopic and shoots out over three times the animal’s resting height. The Bloatbeast also has a “snortle” instead of a separate nose and mouth, and food is sucked into that orifice  and swallowed whole without chewing.

The Bloatbeast’s snortle combined with its telescopic neck allow it to strip fruit from the tops of trees even though it cannot jump or climb.

The Snortled Bloatbeast is the worst pest afflicting Texas’s marshmallow growers, and a single animal can strip an entire grove of marshmallow trees in a single night.

Only year-round hunting has been able to control the Bloatbeast population, and that is why the state of Texas subsidizes assault rifles for minors and looks the other way when mistakes are made.

It’s all part of the Texas Department of Agriculture’s “Keep the Lead Flyin’!” campaign aimed at limiting the populations of Bloatbeasts to pre-1972 levels.

The year 1972 is significant because that was the year marshmallow peeps were first sold, and soaring demand for that inedible product was largely responsible for most arable land in Texas being replanted with groves of marshmallow trees. The rest was used for dumping old AOL junk mail CDs.

Scientists have developed a way to synthesize marshmallow peeps and other gross holiday candies from melted down AOL CDs.

This breakthrough is significant if for no other reason than the fact that the landfills of North America are estimated to contain over three trillion metric tons of discarded America Online CDs, representing over 65% of the total landfill volume. The rest is marshmallow peeps.