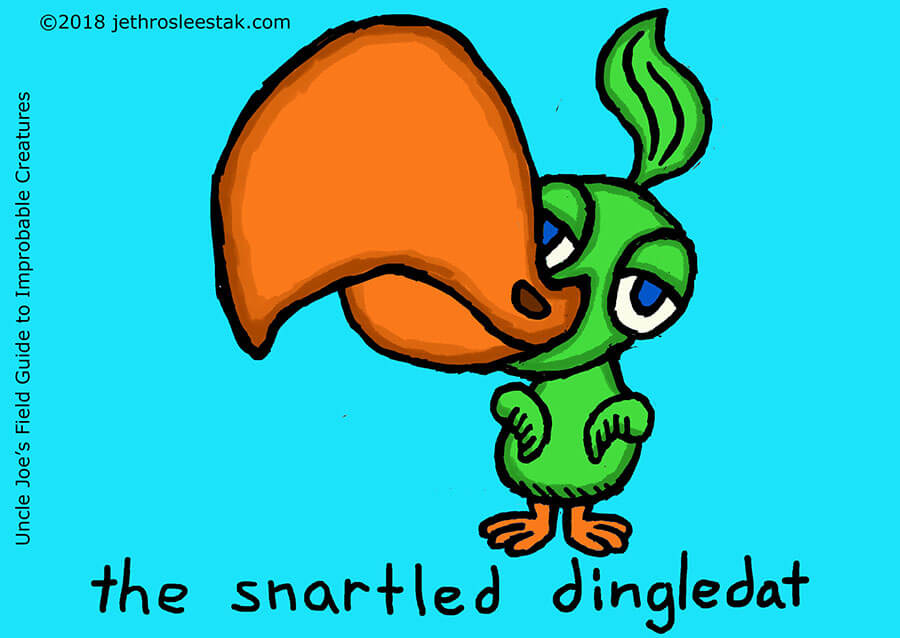 The Snartled Dingledat is the smallest of the Australian squawkbirds, which is a loose term referring to multiple ground-dwelling species of varying temperament.

Like all squawkbirds, the Dingledat will squawk and flap its useless wings if you startle it, but the Dingledat is different in one terrible way: The Dingledat doesn’t run away. Instead, the Dingledat leaps and lunges and snaps right at crotch level with its powerful oversize beak.

As article 357 of the Australian Constitution reads, “More than one bloke has had his willy shortened taking a piss in the dark with a Dingledat underfoot. And so no fiddling with the price of horses, if we say we don’t want that. And the same with the taxes, by Christ.”

Legal scholars in Australia have long interpreted this article (and all 432 articles drafted AFTER the third keg arrived that first Constitution Day) to be “mere rhetoric and not policy” and inadmissible in any discussion of the legal meaning or intent of the previous articles 1 through 17, which are considered “valid, literal, and true.”

That is why Australians will try to do at least 17 shots on their Constitution Day. And most other weekends too.

The Dingledat nests inside discarded furniture made from particle board and seems to prefer cheap-ass entertainment centers to cheap-ass dressers.

Gullies behind ratty apartment complexes where poorly made furniture is  dumped illegally on a frequent basis and never collected.