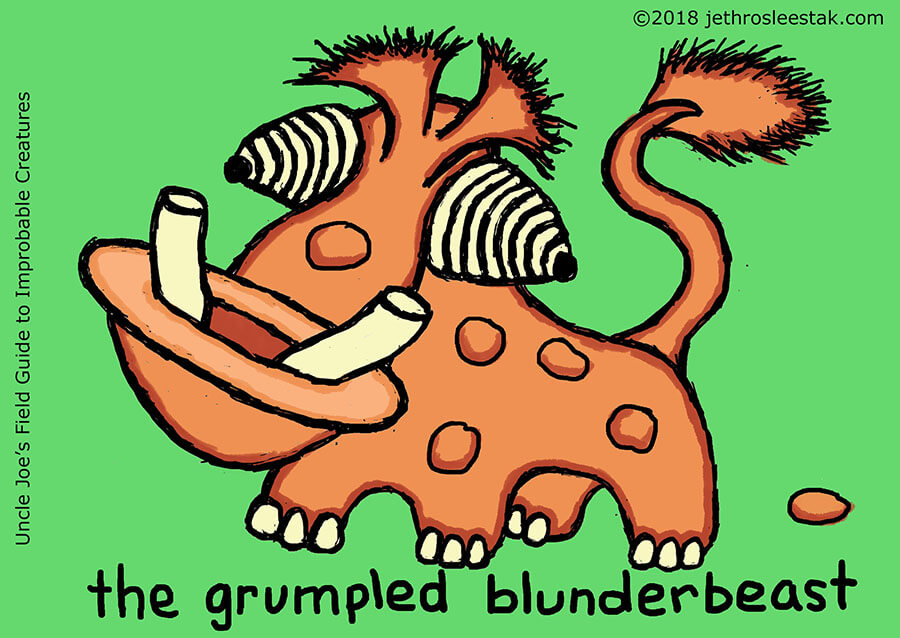 General Hannibal and his Carthaginian army crossed the alps in 218 BC with some armored elephants, but it was the larger and clumsier Blunderbeasts that they brought that truly terrorized the people of the Roman countryside.

The ancient Roman writer Livy and the Greek historian Polybius (our primary sources for the events) agree that Hannibal took great care in guiding his elephants through the steep mountain passes, but he let the Blunderbeasts “just roll down the damn mountainside, taking out trees and boulders and fuck all.”

The Grumpled Blunderbeast is protected from its own clumsiness by a thick layer of greasy cheesy hide, which constantly flakes off in chips of dandruff the size and thickness of a Frisbee.

Before the Sahara desert expanded and there were still Blunderbeast living in North Africa, the ancient peoples there gathered and dried these flakes of Blunderbeast hide (grumple) and ground them to make pumpkin spice.

Pumpkin spice was used in the ancient Mediterranean world as a means of making a pig or dog vomit up any jewelry it may have swallowed when devouring corpses on a battlefield, and it is mentioned by various ancient writers for this odious purpose.

According to Cicero, that was how Harrumphacles retrieved his father’s golden cock ring and butt plug after the disastrous battle of Syracuse.

These two famous artifacts were stolen by Napoleon’s troops and are now part of the Louvre’s “pumpkin spice” collection.

The last herd of Grumpled Blunderbeast were hunted to extinction for the third season of the Victorian reality-TV series, “James, Could You Please Hand Me My Rifle?” That was the series Charles Dickens famously wrote for before striking out on his own.