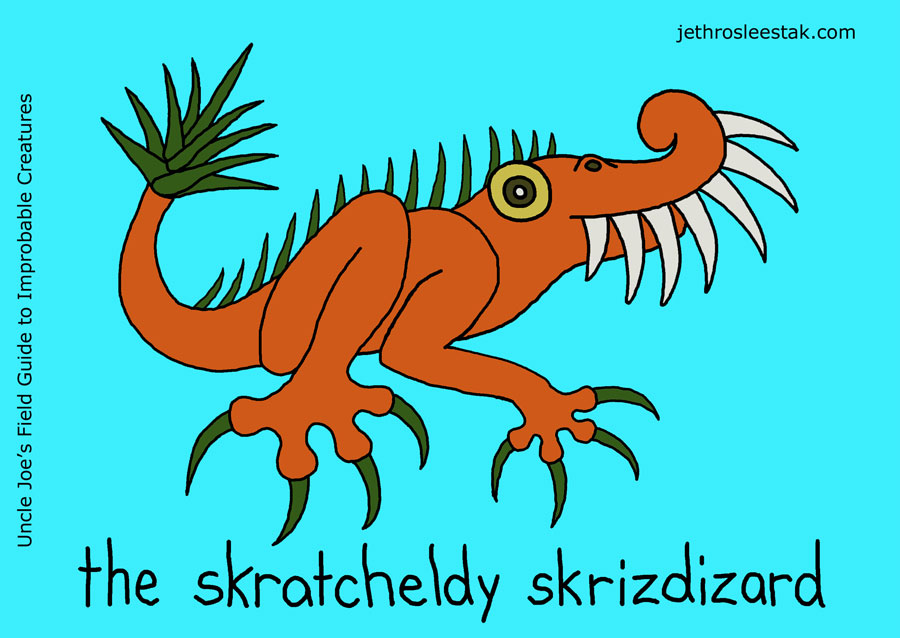 The Skratcheldy Skrizdizard is sometimes called the razor toe or the ouch lizard or the oh-god-it-jumps-lookout. Herpetologists claim that it is impossible to handle the Skrizdizard without pricking your fingers multiple times and recommend wearing steel-mesh cutting gloves such as used by butchers.

Every year, hundreds of men (and even a few women, sad to say) try to hold a Skrizdizard for a full two minutes without getting punctured as part of The Macho Dumb Ass of The Year competition. The TMDAY (pronounced “Tam Day”) competition has been held in the town of Dead Neighbor, Texas every year since 1897, but so far the herpetologists’ claim stands, and every contestant has walked away with bleeding hands and a splitting headache.

The venom in the Skrizdizard’s spines and claws causes blinding headaches that last for up to 24 hours. Consequently, no one has ever attempted the TMDAY competition more than once, but it is something of a rite of passage for twenty-somethings in west Texas.

In recent years, the TMDAY competition has been gaining national notoriety and even participation thanks to ESPN 8’s “Ocho With The Idiots” program. But there has been controversy and friction at the event. Locals resent the outsiders and agree that “There ain’t no macho dumbass like a Texas macho dumbass.”

The first “contestants” were seven Texas farm hands hired by a travelling collector named Archibald who supplied exotic specimens to wealthy British naturalists. Archibald was passing through Dead Neighbor following a ruinous expedition to the Rockies, where he had only managed to collect the hides of some hairy apes that had huge feet for walking on snow, but he knew these pelts to be barely worth cost of transporting them –they sold for next to nothing in London because everyone already had one and assumed they were suspect to come so cheap.

Archibald heard of the Skrizdizard by chance while drinking in the saloon of the hotel in Dead Neighbor, and he saw the poisonous lizard as a chance to come back to London with something more lucrative than his brown ape pelts. Archibald hired seven drunken cowboys then and there to capture as many specimens as possible in the four and half hours before his train left for Houston, the port of Galveston, and the ship home to England.

Archibald grew impatient with the drunken cowboys and their boasting and arguing about who could catch the most in a single afternoon, and so to get them moving, he promised the man who caught the most an extra three silver dollars. That is how things got so out of hand.

In addition to broken arms and missing teeth and other injuries from fighting, all seven men nearly died from the amount of venom they had exposed themselves to. Accounts say that they begged to be shot but were in too much pain to do it themselves.

Early the following year, an account of the hunt ran in the London Times as “Machismo Dumb Asses Compete in Tejas,” and the article was soon reprinted by papers in Austin and San Antonio, inspiring editorials and similar hunts in towns across western Texas.

Within a decade, the competition in Dead Neighbor had consolidated all others, but it had been changed into a competition over how long a contestant could hold the suddenly scarce lizard before getting scratched.

The different indigenous peoples of the southwestern United States and northern Mexico all refer to the Skrizdizard as Brother Ouch in their mythologies. In the Zuni creation myth, the red desert came into being when the Sun accidentally sat on Brother Ouch and bled onto the earth. The vanished Anasazi people of the canyon pueblos believed that accidentally sitting on Brother Ouch brought bad luck of the worst kind.

Inside the RV camper of Ed and Sue Lindstrom of Mooselip, Minnesota. Ed and Sue have just driven out of the parking lot of the Smiting Angel Butte National Monument in Arizona. Sue is worried that one of the scary lizards she saw in the parking lot somehow got inside the camper with them. She is afraid that the lizard is in the cabinets or curtains or somewhere just waiting to jump on her. Sue is terrified of all lizards, and has been since she was a girl. Very terrified. But Ed told her not to worry. “Lizards wouldn’t come in the damn camper, and even if one did, it wouldn’t be one a them Scratch Toads that’s got you so worried. Relax Sue, why dontcha.”