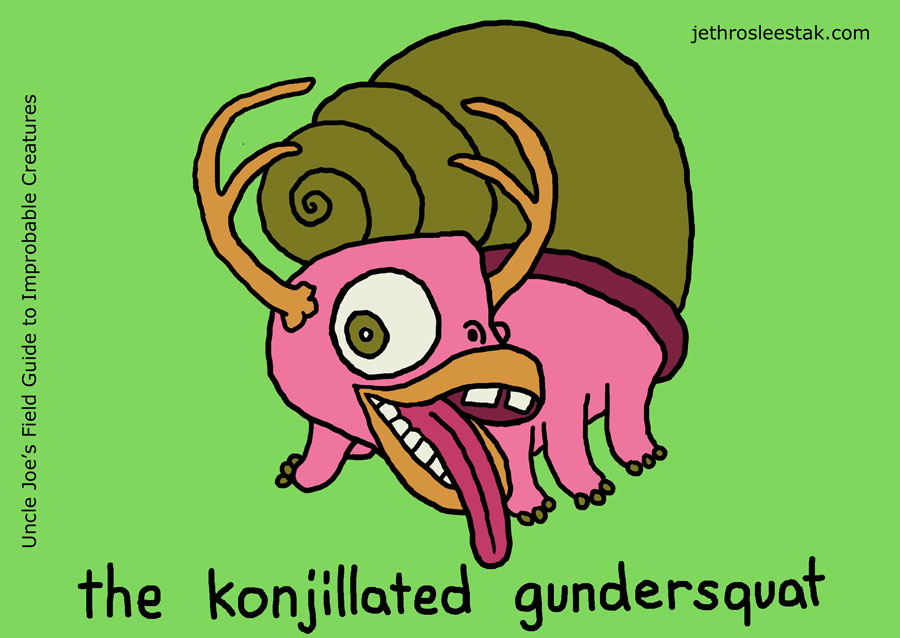 The Konjillated Gundersquat’s escape from the lab marked the end of Santa’s dabbling in genetic engineering, at least those experiments aimed at hybridizing reindeer with other species.

Most experts on escaped GMOs believe that that the Gundersquat was a misguided attempt to produce a cold-hardy species of escargot or conch and point to Santa’s fondness for both shellfish and French cuisine as evidence for their theory. Others point to more sinister motives.

But theories about the exact origins of the Gundersquat are academic. What matters most now is that the walnut-sized creature has escaped the lab and become an invasive pest that threatens to destabilize global ecosystems.

The first Gundersquat ever reported was found in the toe of a Christmas stocking in Newark, New Jersey in 1982. The following year, there were thousands of Gundersquat incidents in the state of New Jersey alone, with many homes being overrun completely. These contaminated houses were “sanitized” by the National Guard using a combination of airborne napalm drops and ground-based flame throwers. Though NJ Governor Kean was initially criticized for his scorched-earth policy, he was later credited with being one of the first elected officials to fully recognize the extent of the threat and what was at stake.

There would be three more disastrous Christmases before it was discovered that the glitter and tinsel shed by cheaply-made Christmas decorations are extremely toxic to the Gundersquat and serve as a “natural” means of protecting a home during the holiday season. Since then, Walmart and other retailers have bravely stepped up to the plate and produced ever increasing amounts of cheap plastic Christmas decorations covered in poorly-attached glitter.

Most consumers are completely unaware that the reason Walmart starts selling Christmas decorations earlier and earlier each year is because both the EPA and the Department of the Interior pressure them to do so. The government’s reasoning is that if they can get people to decorate their homes the day after Thanksgiving, there should be enough cheap glitter and tinsel ground into the carpets of American homes by the time Santa visits to kill ordinary house pets and small children much less the Gundersquats.

Each Gundersquat produces so many thousands of offspring because each female is “konjillated” with a tiny male that lives permanently attached to the female’s genitals inside her shell. Rapper MoDisShit’s Grammy-winning song “Konjillated” makes reference to the Gundersquat in the following lines:

“Gone be up in dat shell, konjillatin’ dat booty.

Gone be up in dat shell, gundersquattin’ dat coochie.”

The homes of Jews and other people who don’t buy enough cheap plastic Christmas crap to protect themselves.