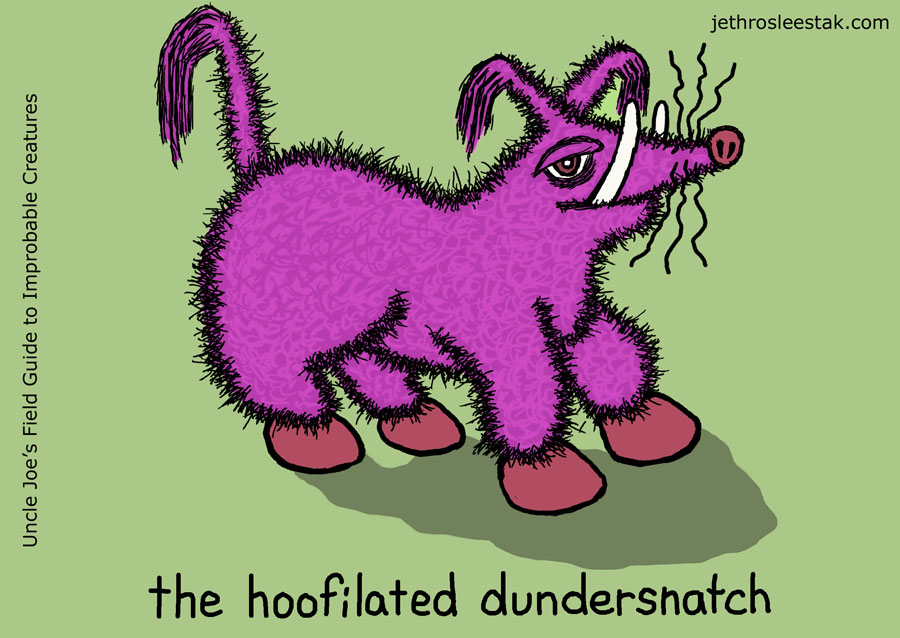 Most people know that Dr. Equinox was the genetic engineer who produced over a hundred novel variations of the horse by combining DNA from other species, but few know that before his career in the sciences, he was a struggling NYC fashion designer ruined by his obsession with 1970s ghetto pimp stereotypes.

The Hoofilated Dundersnatch is the size of a woolly mammoth and is generally regarded to be one of Dr. Equinox’s more odd creations. The animal has horse’s hooves, but it does not trot, cantor, or gallop like a horse. Instead, the animal struts to the syncopated rhythms of Stevie Wonder’s “Superstition.” More often than not, the Dundersnatch is ridden by drunken frat boys in colorful velvet tuxedos with capes and bell bottoms and matching wide-brimmed hats trimmed in fur.

At first it was not known whether the Dundersnatch produced its own party goers or attracted them as needed. Then scientists learned that the Dundersnatch can excrete as many drunken buffoons as needed to replace those that fall off and get stepped on. New celebrants simply hatch from the Dundersnatch’s giant droppings and scream things like “yeehaw!” and “hell yeah!” and climb right up on the animal’s back, usually before they have completely shaken off all the excrement.

The Dundersnatch never stops dancing during this entire process, and so many of those hoping to party down with their bros are “hoofilated” before they even get on the animal. Why does the Hoofilated Dundersnatch not stop dancing to let them get on? Would you stop dancing if Stevie Wonder’s “Superstition” were playing? No you wouldn’t. It’s a bad ass song.

You can smoke the dried droppings of the Hoofilated Dundersnatch, but it will only make your head hurt and your breath smell like burning horse shit.

The college days of yore.