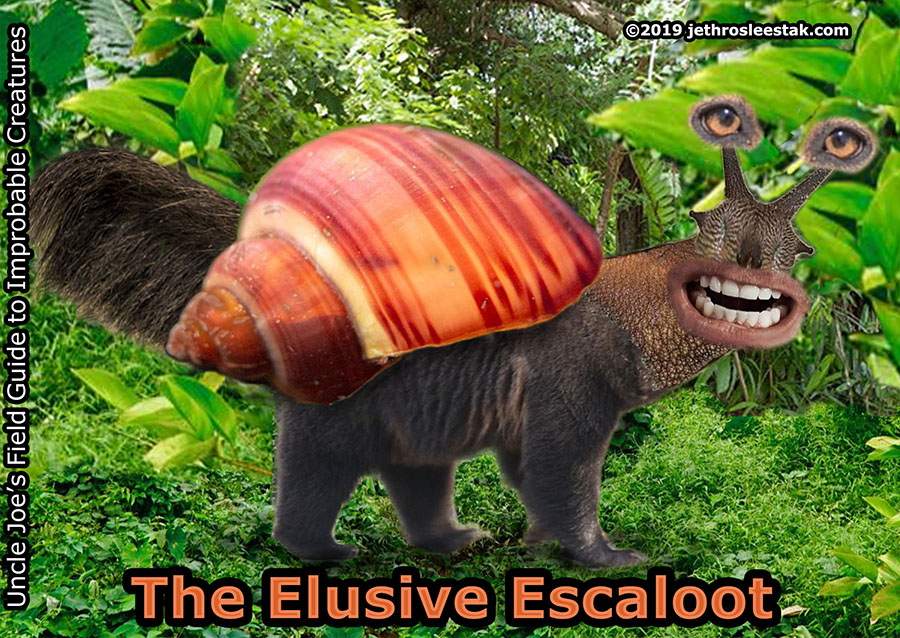 The Elusive Escaloot is the most difficult to control of all the “stink weasel” snail hybrids because it is a master of staying hidden. As naturalist Sir David Attenborough said, “You can always smell em, but you can never spot the little motherfuckers.”

That is why Escaloot are the only animal Sir David hunts using a combination of flame throwers and napalm air strikes.

The Escaloot’s spray of reeking mucus contains sticky globules of pure stink that are impossible to wash off. These musk globules are what perfume makers modify with chemicals and use to create lasting fragrances.

Of course you probably read it in high school, but in case you didn’t, you should:

When Moe accepted the Nobel Prize in Stankology later that same year, his acceptance speech was devoted to shout outs for his corporate sponsors and a new rap album he had recently released:

The Elusive Escaloot was genetically engineered for the production of musk-mucus after the popular men’s cologne “Chode” by Ron Jeremy created a surge in demand for the noxious ingredient.

The weeds around the cul-de-sacs of unfinished subdivisions and the parking lots of abandoned shopping malls. The Escaloot can lay its eggs only in boarded-up fast-food restaurants (and Denny’s if they’re not too busy).