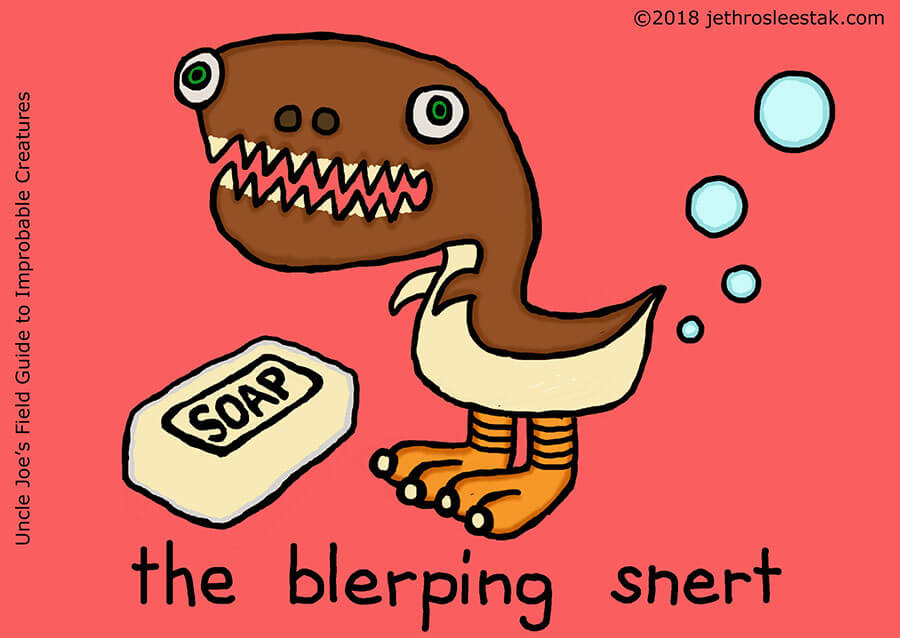 The Blerping Snert is an unlicensed GMO of unknown origin and serves no known purpose. It is odd in several ways.

The creatures eats bars of soap and will eat as many as you give it, to the point that it will actually fart soap bubbles.

It lays its eggs exclusively in miniature golf courses.

It will aggressively attack any person named Ralphonzalo T. Ponzalo III, Jerry J. Mackinberry, or Hostible D. Postible. Since the Snert’s genome is a combination of goose and shark DNA, these attacks can be quite scary.

Right now, the CDC estimates there will be just under 7000 attacks this year for all the RTP3 ‘s out there, and another 3000 or so for the Jerry J. Mackinberry’s and the Hostible B. Postible’s combined. Then they estimate the usual 200 or so for any “Robert McNobert’s” or whoever it is if anyone new gets attacked for the first time this year. It always starts low.

As Mark Twain observed in Life on the Mississippi, “The Snert yowls at the moon all night long like cats in heat, twice as loud, and three times as jarring on the nerves. Worse than a baby screaming. That’s the real reason the Allies had to fire bomb Dresden. To put them out of their damn misery.”

Here Twain is referring to Hitler’s last-ditch plan to save the war by converting every last public space in Dresden into miniature golf courses.

During nesting season, flocks of Snert converge on the world’s miniature golf courses, and there they howl day and night for eight weeks. The sound is hard to bear because the Snert makes a shrill honking sound that gets progressively more and more strident, more distressed: “blerp! BLERP! BLEEEEERP!”

The CDC reports an increase in the suicide rate in neighborhoods within a mile of miniature golf courses during the Snert’s two-month nesting season, and they recommend people living in affected locations wear hearing protection and use a white noise source such as a fan or air filter.

The CDC’s “Don’t Blerp Your Life Away” campaign featured controversial ads with full frontal nudity, but they were effective in reducing Snert-related suicides.